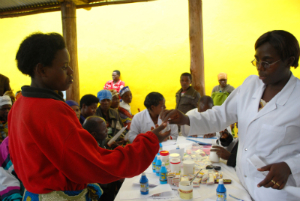 Bisate, Rwanda – The small open-air shed next to the main clinic building is filled to capacity one early Wednesday afternoon, as more than 100 people patiently wait their turn to come to the front. Then, as the nurses call them, they leave their benches one by one and approach a small table, where they exchange pieces of white paper, indicating diagnostics, for boxes of pills.

The process is repeated for hours every day this week, as the local clinic, supported by the Dian Fossey Gorilla Fund International, is treating 1,000 people in Bisate against intestinal worms. After a month of fecal sample collection and lab analysis, more than half of those tested were found to carry parasites. Others are given preventive medication, as clinic head Jacqueline Nyirabyimana explains:

“This is a region where parasites thrive, due to the scarcity of clean water and lack of proper hygiene. Everyone either has been or definitely will be infested at one time or another, so prophylaxis is just as important as treatment.”

This is the first de-worming campaign for this community in over two years and the fourth since the Fossey Fund started working with the Bisate clinic. Nearly $3,000 was allotted this time for lab materials, medication and personnel fees. The campaign is aimed exclusively at diagnosing and treating adults, as children already benefit from such programs on a regular basis through the Rwandan Government.

“This is a long-overdue campaign,” says Nyirabyimana. “Parents ask us all the time how come adults are not tested and treated routinely as well. Besides, if only some family members are de-wormed and others not, the positive impact will be undermined.” Ideally, she adds, patients should be tested every three months, but in practice once a year would be a good target to aim for. 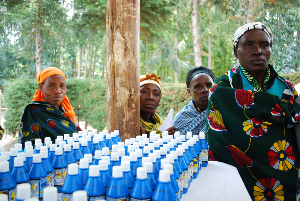 This time, Bisate villagers received not only oral medication but also small bottles of a chlorine-like substance, a few drops of which are used to improve the quality of their drinking water. Although they are always advised to boil their water before consumption, many locals admit to not doing so.

Ascaris, amoebae and tapeworms are among the most common parasites here, causing scores of problems, such as intestinal occlusions and diarrhea, and also preventing proper growth in children, as worms will feed on any nutritious foods children ingest. As Nyirabyimana points out, poverty is also a dire, if indirect, consequence. In a family where parents are constantly suffering from parasites and are unable to work enough – or at all – everyone will in turn suffer from lack of income and food. 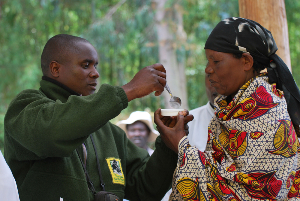 Intestinal parasite treatment and prevention for people who live near gorilla habitat where the Fossey Fund works are part of the Fund’s Ecosystem Health program in both Rwanda and the Congo. The program also rehabilitates rural clinics and helps communities gain access to sources of clean water and protein. In addition to improving people’s health, this reduces their need to enter the forest illegally to find food and water and also prevents the transmission of parasites and disease from humans to gorillas.