The Dian Fossey Gorilla Fund is excited to report that on Sept. 18, 2014, 10-year-old mountain gorilla Ubufatanye gave birth, marking the first birth in Musilikale’s group. The group formed in April 2013 after the splitting of Pablo’s group, and Ubufatanye, better known as “Fat,” transferred to the group in January 2014. Due to the time of Fat’s arrival in the group, there is little doubt the father is one of the silverbacks in the group, most likely dominant Musilikale. 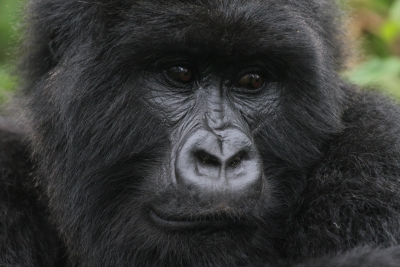 Fat was born in Ugenda’s group but has transferred among groups many times during her life. She travelled for a few days at a time with lone silverback Gwiza, and spent time in other groups, such as Titus, Gushimira and Isabukuru’s groups. Typically, female mountain gorillas can become mothers around age 10, so trackers and scientists were excited to see Fat settle down in a group to experience maternity.

Fossey Fund trackers and other staff were particularly happy about this birth because there have been several infant deaths recently. Infant mortality is high among gorillas but even so a new birth is an uplifting and exciting time.