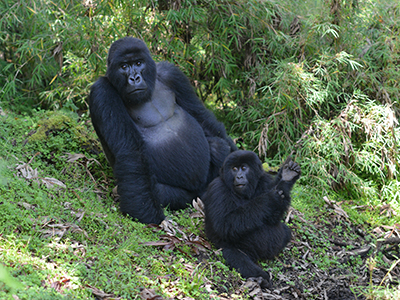 Since the death of dominant silverback Turakora on March 10, Fossey Fund trackers and researchers have been watching to see how his group has reacted to this loss. Turakora was in his prime, and died after an unknown illness.

Initially, the females in the group seemed to surround the younger of the two remaining silverbacks – 15-year-old Urwibutso, rather than 16-year-old Pato. Pato had been more popular with the females before Turakora died, so we were surprised by this. Females liked to groom Pato and rest with him. But now, Pato was seen being more often on the periphery of the group, and alone from the others.

However, the situation seems to have since changed again. Over the last 3-4 weeks, it is again Pato who is preferred by the three females (Kubana, Imvune, and Kurudi, who looks like she may give birth soon). Urwibutso is now staying more apart from the group, though usually accompanied by his younger brother, Segasira. Our trackers also report that Pato seems to be the one guiding the group’s movement.

However, it is still too early to know for sure which of the two silverbacks is, or will be, the true dominant one. So far they have been keeping their distance from each other and not challenging one another. Even when they are closer together, they seem to tolerate each other. Since they both grew up in the same group (called Beetsme’s group), this is perhaps not that surprising. Beetsme’s group was known for being very peaceful.

Fossey Fund staff will be watching this group closely over the next few months, to see which silverback ends up as dominant and how the rest of the group continues to adjust to the sudden loss of Turakora.