Due to years of civil unrest and other obstacles, Grauer’s gorillas (found only in the Democratic Republic of Congo) have received little protection and minimal study, but we know their numbers are falling. This type of gorilla is included among the 25 most-endangered primates in the world by the International Union for the Conservation of Nature. 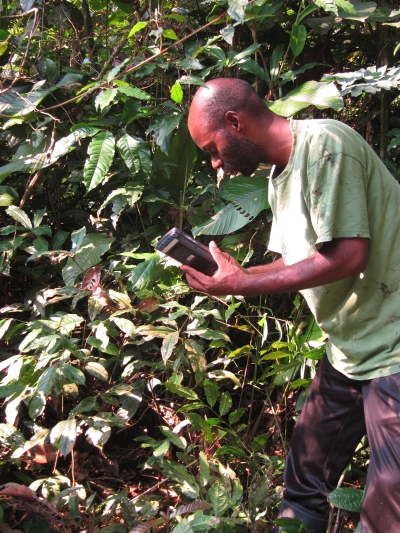 In 2012, the Dian Fossey Gorilla Fund established a permanent research and conservation field station in the village of Nkuba, in the heart of the Grauer’s gorilla range in eastern Congo, also home to other highly endangered wildlife. We have intensively surveyed an adjacent 700-square-kilometer area (which is more than four times the size of the available gorilla habitat in all of Rwanda) and identified a population of some 150 Grauer’s gorillas living in 14 groups, which we are now regularly monitoring and protecting through our presence in the forest. But the process of tracking gorillas here is very different from our work following habituated gorilla groups in Rwanda’s Volcanoes National Park.

In Congo, we set up camp in the field and the gorillas are not habituated to human presence. Once trackers find a nest site, they follow the trails of the group, leaving one day’s distance between them in order to not stress the gorillas or alter their activities.

Here’s what Research and Conservation Program Manager Escobar Binyinyi says are among the top five things trackers look for once they’ve found a nest site:

Can you guess what some of the other “clues” our trackers look for are? Some of our trackers have special talents and knowledge of the forest that help them identify key signs and other important information! To get answers and read more about gorilla tracking in Congo, how our staff prepares to go into the forest and what happens if a trail is lost, be sure to read our March eNews! It’s free to sign up if you haven’t already. http://gorillafund.org/newsletter_signup