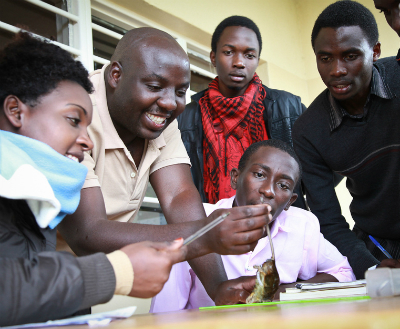 The Dian Fossey Gorilla Fund’s Biodiversity Research and Monitoring program has begun an important new survey of small mammals in Volcanoes National Park, to provide information on changes in the park’s ecosystem, which also includes the mountain gorillas.

Small mammal species play key roles in their ecosystems, as predators, prey, and seed dispersers. Being small, they are also very sensitive to habitat change. While other, larger mammals can generally move to more attractive habitat quickly when their current habitat ceases to meet their needs, small mammals have trouble moving fast enough to stay ahead of environmental changes. This makes them important indicator species of habitat change as well.

One of the primary objectives of the Fossey Fund’s biodiversity program is to monitor changes in the habitat and ecosystem of Volcanoes National Park. For this reason, it is imperative to develop baseline population information about small mammals. But when Deogratias Tuyisingize, the program manager, began looking into past studies on small mammals in the park, he was confronted with very limited information.

“The only scientific document we could access was one which documented the small mammals in Volcanoes National Park in the 1920s,” Tuyisingize says, referring to a survey done by a Swedish expedition to the Virungas. “During the next 80 years, no papers were published on small mammals in the park. So there is no current information.” There was an incomplete study done by a student in the ‘90s, and another study in Uganda in Mgahinga National Park, but in Rwanda, no such work was begun until 2009, he says.

The Fossey Fund began to conduct small mammal surveys in Volcanoes National Park and nearby Buhonga Eco-Park through Tuyisingize’s master’s degree research in 2009 and a pilot study done by undergraduate students from the National University of Rwanda in 2010. With the help of the Chicago Field Museum, the Fossey Fund was able to identify all of the species captured during these studies and to confirm their conservation status. However, these studies did not manage to capture all of the small mammals that the Swedish expedition had recorded in the 1920s.

The Fossey Fund’s biodiversity program decided to begin another small mammal survey in an attempt to assess whether all of the species recorded by the Swedish team are still in the park and have just gone un-captured until now, or whether some of them really do appear to be “missing.”

The current small mammal study, which began in October, will include a round of trapping each season (during the two rainy seasons and the two dry seasons), to account for the possibility that certain species may be present seasonally. It will also employ a wider variety of trapping methods. Among the standard methods are live traps and pitfall traps. Live traps are baited cages that close when an animal enters to eat the food inside. Pitfall traps are buckets placed at 5-meter intervals along a fence. Unable to move forward across the fence, the animals are directed to run along it and eventually fall into a bucket. However, for some subterranean species, like moles and squirrels, the Fossey Fund will employ a locally made trap. Tuyisingize says that he suspects that these traps might be more effective for trapping some species which scientists have been unable to document in past surveys. Already, the biodiversity team has succeeded in finding two species which were missed in the 2009 and 2010 surveys, a type of mouse, and a type of shrew. 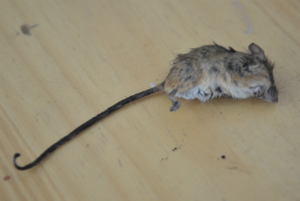 In addition to surveying small mammal species in the park, Tuyisingize is also working on building a collection of small mammal specimens to be housed at the Fossey Fund’s regional research center in Musanze for educational purposes. He is using techniques he learned during a course at the Chicago Field Museum to identify, catalogue, and preserve each specimen. Since the Swedish expedition in the 1920s did not leave any of their specimens behind, the Fossey Fund’s collection of small mammals will be the first of its kind in Rwanda. The collection will be available for educational and research purposes, including when university students visit Karisoke for training in field research techniques.

By the end of the survey, the Biodiversity Research and Monitoring Program will have come a long way in producing baseline data for further small mammal research and monitoring, as well as a comprehensive collection of specimens representing the small mammal community in Volcanoes National Park.

Our biodiversity program and other programs that protect gorillas and their habitats would not be possible without public support for the Dian Fossey Gorilla Fund International. To help, take action-donate.