Forty-five years after Dian Fossey founded the Karisoke Research Center in Rwanda’s Virunga mountains, a new gorilla research and conservation project has officially taken root in a very different landscape hundreds of kilometers to the west. The Fossey Fund has launched its new initiative to bring direct conservation based on the Karisoke model to the endangered Grauer’s gorilla, found only in a vast forest in the Democratic Republic of Congo (DRC).

Urbain Ngobobo, an experienced Congolese conservationist who joined the staff last fall, visited communities in Grauer’s country in September to explain the program to local leaders. The Fossey Fund has already worked for over a dozen years to support a network of community-based gorilla reserves that include a portion, though not all, of the Grauer’s gorilla range. Next, 25 trackers and five team leaders were hired to carry out data collection and monitoring of six populations of gorillas. Many of the trackers have worked with the community reserves. 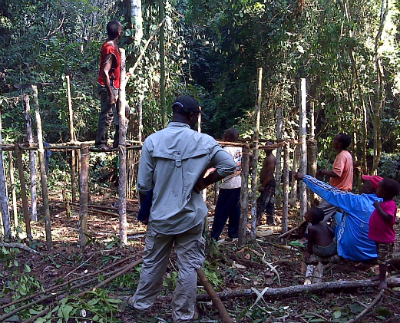 In February, a team which included Ngobobo; the Fossey Fund’s Vice-President, Juan Carlos Bonilla; a Geographic Information System (GIS) technology expert; and members of the local community took the first steps to establish a field research station in the heart of the Grauer’s range.

“I’m excited that we’re making this move, building on our strength in field operations and conservation, applying what we’ve learned at Karisoke,” says Bonilla. “There has been little research in this area since surveys of the Grauer’s gorillas done in the 1990’s before civil war started in the Congo, so no one really knows how many gorillas there are or how they behave. What we’re doing now will begin a major shift in knowledge about these gorillas.”

The Grauer’s gorilla is related to the mountain gorillas protected by Karisoke, but they differ slightly in physiology and appearance, with shorter, lighter hair (better suited to a warmer climate) and a narrower face. They live in lowland forests and were formerly known as eastern lowland gorillas. Due to habitat loss and civil war, the Grauer’s’ numbers are estimated to have declined greatly in recent decades to somewhere between 4,000 and 25,000 individuals, although, as Bonilla mentioned, an accurate count has not yet been possible.

Ted Turner (the Turner Foundation), the Daniel K. Thorne Foundation and USAID’s Central African Regional Program for the Environment (CARPE) are supporting this project. In March, Turner donated $1 million for Grauer’s gorilla conservation, the largest individual gift the Fossey Fund has ever received. However, the project faces significant challenges, beginning with the habitat’s size and remoteness. The Grauer’s gorillas range over a 67,000 square kilometer area bisected by only one major road that is unpaved for much of its length. The area is twice the size of the entire country of Rwanda. “Of course we don’t have the resources to cover the whole area, just to follow key gorilla groups,” says Bonilla. “It’s a much larger arena for us than in the Virungas, and it will require a lot of resources.” 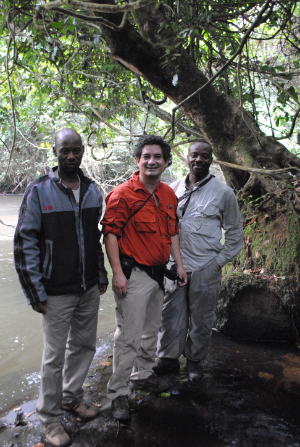 Most of the habitat is unfamiliar territory, even for local inhabitants. Unlike in densely populated Rwanda, the small villages located along the road and rivers that cross the area are bordered by an immense forest. The area has seen a lot of insecurity since the 1990’s, fueled by illegal mining of strategic minerals such as coltan. However, the new research station’s site is somewhat isolated from the most conflictive areas, and project planners believe the site to be relatively secure – though there is no guarantee, and some fighting has occurred to the east.

“It’s a calculated risk, but one worth taking,” says Bonilla. “We are nonpolitical and nonpartisan, and protecting gorillas benefits everyone. Many people there have been feeling abandoned, so they believe it’s a good sign that we are there. They were very excited when we arrived, and welcomed us warmly. Not incidentally, we bring 30 good jobs, support clinics and schools, and will contribute to the local economy. The local authorities are proud of the gorillas and the forest, and glad to see us making the effort to be with them.”

Seven men are now stationed at the new field site on the bank of the Biruwe River, which will become the main operations and research center. A simple shelter is in place. Another, smaller camp site has also been identified on the Lowa River, further south, to house visiting scientists and supporters. The camps are on the other side of the African continental divide from the Fossey Fund’s Congo program headquarters in the city of Goma. The trip from Goma requires taking a small plane to a stretch of paved road that serves as a landing strip, then driving for an hour and 20 minutes to Biruwe Village and south from there along the river.

The field station will soon be equipped with a Land Cruiser and five motorcycles, as well as two inflatable motorboats for river travel. In addition, the project will deploy a floating “micro hydro” generator powered by river current, a satellite dish for Internet connection, and high quality GPS technology – state-of-the-art high-tech equipment in a remote, primeval forest. Tents will house the trackers, who will begin visiting areas where gorillas have been reported by the local communities. The communities have also reported chimpanzees, buffalo, elephants and leopards in the forest.

The Fossey Fund is sending a team of primatologists to validate the communities’ data on the location of gorilla groups and select two sites for satellite camps in the heart of Grauer’s territory, one to the southwest and another to the southeast of the main camp. The scientists will record gorilla signs such as nests and dung. The results of these “rapid assessments” will define where the first two study areas will be. 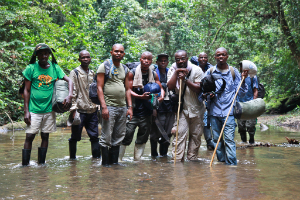 In April, the first assessment team flew from Goma to the Punia Gorilla Reserve (RGPU), via a bush plane to Kasese, DRC. The reserve is extremely remote and no roads connect the villages; they are only accessible by motorbike, through a network of narrow jungle paths. On the first two to three kilometers into the trek from Kasese, the team encountered many villagers toting wood, water, palm fruit and food out of the forest. They also found snares and evidence of coltan mining.

While anti-poaching patrols have been a key part of Karisoke’s “active conservation” approach in Rwanda, this technique is not feasible in eastern DRC, primarily due to the enormous size of the area. Instead, says Karisoke researcher Stacy Rosenbaum, “alternative ways of fighting poaching will be considered: intelligence gathering, monitoring of key areas (airstrips and areas surrounding the research station) and a hotline for reporting poaching incidents. Additionally, because of the multitude of threats that Grauer’s gorillas face in this region of DRC, the research program will prioritize data on these problems and the effectiveness of any solutions we implement.”A team will soon spend a month completing the Biruwe camp facilities. By fall, the Fossey Fund will join a consortium of conservation organizations conducting a survey of the Grauer’s population across their complete range.

Working in the DRC is notoriously dangerous and extremely expensive, but the price tag is not too high for saving gorillas, one of the world's most crucial rainforests and the many other species that live in it. “We have a presence in the field now,” says Bonilla. “Eventually, a lot of information will start streaming from the camps. We will use our cutting-edge technology to send information to the ‘cloud.’ People will even be able to watch the gorillas through the Internet.”