The Dian Fossey Gorilla Fund International is involved in a number of community development projects in Rwanda and in the Democratic Republic of Congo, including the following:
In Rwanda:
In Kigali, the capital city where we have our African headquarters, we have three developmental projects that are currently being funded: 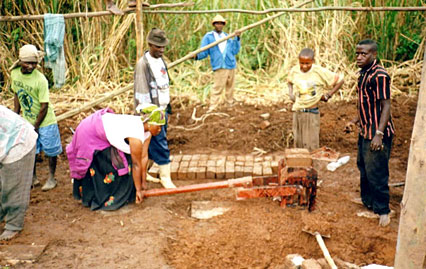 In Ruhengeri, where the Karisoke Research Center is based, we are sponsoring a development project with the Ba'Twa people. The Ba'Twa are the indigenous people of Rwanda and historically have been called “pygmies” because of their small stature. Unfortunately, they suffer from extreme poverty and lack of financial independence.

Two local organizations — CAURWA (indigenous peoples organization) and REDO (an organization that helps integrate the Ba'Twa with the other ethnic groups) — sent DFGFI a proposal for developmental activities which include bee-keeping, mushroom-growing, identification of medicinal plants, and the fabrication of low-energy stoves.

We funded their proposal in May 2004, and the people have already been trained in sustainable methods of bee-keeping and mushroom-growing. Supplies for the two projects are arriving. The fabrication of low-energy stoves will be starting this month. More than 60 species of medicinal plants have already been identified.

In the Democratic Republic of Congo:

Our thanks go to the special donors who have helped to fund these projects!