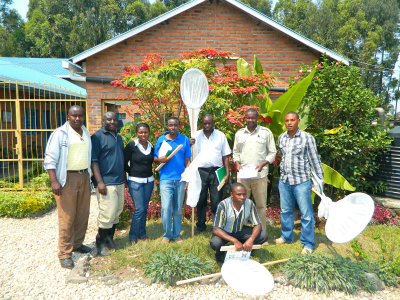 This summer, science teachers from seven different schools located around the Volcanoes National Park in Rwanda participated in a training workshop on schoolyard ecology conducted by the Dian Fossey Gorilla Fund at its Karisoke Research Center. The training provided information about how to develop and nurture wildlife habitats on school grounds, and how schoolyard habitats can act as a powerful platform to teach students about endemic wildlife and conservation.

The training was a part of the Fossey Fund’s conservation education program “Citizen Science” initiatives, which aim to promote student-directed and interactive learning. The teachers who participated in the workshop are faculty leaders of nature clubs at their respective schools and have been participating in Citizen Science initiatives since 2011, when the program was made possible through with generous support of a grant from Nature’s Path. The focus of this year’s workshop, instruction on building schoolyard habitats, promotes students’ scientific inquiry by creating a space that allows them to become scientists in their own communities.

During the two-day training, the teachers learned how to create a suitable habitat for wildlife on school grounds, through teachings on the essential components of an ecosystem: food, water and cover. Additionally, the teachers were introduced to butterfly monitoring, catching and identification. In previous sessions, Citizen Science training provided training in common bird monitoring, as both birds and butterflies are among the key species that will be attracted to the schoolyard habitats.

Following the Citizen Science workshop, the Fossey Fund, in collaboration with the participating schools, organized a day to practice the concepts covered in the workshop in the field. For example, all seven of the teachers along with staff from the Fossey Fund convened at the St. Vincent de Muhoza School, where they constructed a brush shelter and a water-drinking hole to attract wildlife to the schoolyard. The participating teachers were provided with pieces of tarp and wood, to be used in building schoolyard habitats in their own schools.

Additionally, the techniques in butterfly catching and identification that were taught during the workshop were also put into practice. Each teacher was provided with a butterfly net and went to the school yards to try catching butterflies. Deogratias Tuyisingize, the Fossey Fund’s biodiversity monitoring and research program coordinator, aided the teachers in identifying and cataloging the butterflies they caught. Each teacher was also provided with a butterfly identification book, put together by Fossey staff, that has big pictures and names of all the butterflies found in Rwanda. 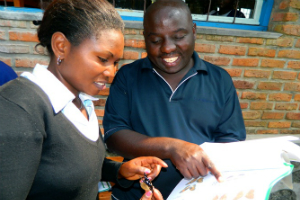 Joseph Karama, manager of the Fossey Fund’s conservation education program, is looking forward to returning to the schools in the next several months to see the growth of the schoolyard habitats. “Having a habitat for small wildlife in the schoolyard,” Karama says, “provides students and teachers with an outdoor laboratory where they can investigate and learn about ecosystems and the species living within that habitat, while nurturing their innate curiosity about nature.”

The Citizen Science program at the Fossey Fund has been sponsored by long-time supporter Nature’s Path and is one of several conservation education programs that would not be possible without specific financial support. The box for Nature’s Path Gorilla Munch cereal has long featured the Fossey Fund’s gorilla protection program as well as educational information about the endangered mountain gorillas, and their sponsorship has supported field programs as well.