The Dian Fossey Circle Luncheon, held each year in New York City, is a special way that long-time major donors to the Fossey Fund are thanked for their commitment to saving gorillas. The event, which is headlined by honorary chair Sigourney Weaver, features reports from our senior staff and field scientists, as well as a panel discussion and question-and-answer session. Attendees learn about the latest happenings among the gorillas in the field and about all of our activities to protect, monitor and study them. 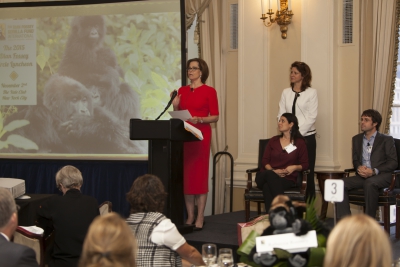 This year, our gorilla program manager in Rwanda, Veronica Vecellio, gave an inside look at the gorilla groups we monitor from our Karisoke Research Center, as we approach the 50-year mark of our work there. Then, Dr. Damien Caillaud described our efforts to replicate this success in nearby Democratic Republic of Congo, where a different type of gorilla (called Grauer’s gorillas) are facing a rapid decline due to decades of threats to their survival and almost no protection until now.

The Dian Fossey Circle includes donors who make an annual gift of $1,000 or more. In addition to the luncheon, Circle Members receive three online adoptions, invitations to live field updates, and other benefits. Some of the attendees at this year’s luncheon have given for more than 20 years. Indeed, Sigourney Weaver has supported the Fossey Fund ever since she portrayed Dian Fossey in the movie “Gorillas in the Mist,” which was released in 1988, after she spent time with the mountain gorillas in Rwanda.