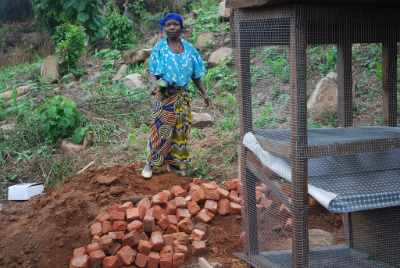 Kasugho, DRC – The late summer sun was about to set over this secluded village surrounded by thick forests in the eastern Democratic Republic of Congo (DRC), but Matembela Mbambu was still adamantly carrying loads of bricks on her head up the steep slope. Behind her, another dozen women packed with heavy supplies were conquering the hill, seemingly effortlessly. In a few minutes, they reached a dirt platform and off-loaded. Here other villagers took over, piling the materials and starting to build small structures.

Matembela and her fellow workers made up that day’s shift, part of a group of more than 500 women in Kasugho, who belong to the Congolese Women’s Cooperative for Community and Conservation. They are all single mothers who either lost their husbands in combat, fell victim to rape by soldiers and rebels, or had been forced to become prostitutes. Looked down upon in the society they live in, they are the poorest among the poor. Without any alternative income or support for their children, they pin all hope for survival on this association. 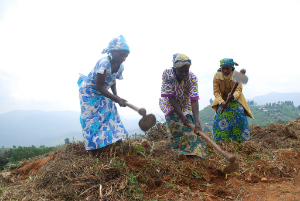 Until very recently, small-size agriculture had been their only source of provisions, but for the past two months, a Fossey Fund pilot project has kept them all busy — and even optimistic. Up the hill they were building a chicken-and-rabbit farm, from which they would eventually derive both essential foods and revenue.

Already in the build-up phase, the project — which is run with help from the Disney Corporation — generated a lot of enthusiasm and even pride among the women.

“I am taking part in creating something special that will enable us to feed our children,” said 37-year-old Matembela, the cooperative secretary. “It will also help us fight poaching, as we will have meat readily available in the village.”

Another woman, 33-year-old Mahamba Kavugho, also hailed the project, underlining how rabbits in particular, as mammals, would prove a viable alternative to bush meat. She also seemed more at ease about her personal security.

“Raising animals here will also make us safer,” Mahamba said. “It is generally quite risky for us women to go alone into the forest to search for meat.”

In order to help the local people successfully implement the protein enrichment project, animal husbandry specialist Luitzen Santman came in as a consultant for the Fossey Fund. He has trained some members of the cooperative and also designed a manual and a poster, explaining in detail the steps that will be needed for sustaining and eventually expanding this project.

“You would think that raising chickens is very basic, but previous attempts have failed here,” Santman says. “In this war-torn, damaged society, people have really just relied on hunting and have not learned how to properly raise animals. That is how we ended up with this paradox: people eating expensive eggs imported from Uganda in the middle of the Congolese forest. We are here now to change all that.” 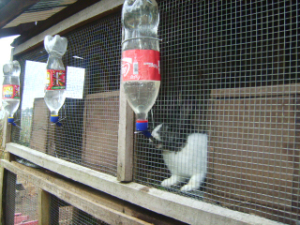 And progress is, indeed, considerable. By mid-September, 24 rabbit cages had been built, and their new inhabitants were all in good health. When a female gave birth to seven bunnies, the news spread fast within the association and beyond. One model chicken cage was also constructed, using very few materials, which will make it feasible for people to adapt it for their own back yards.

“For all types of animal housing we have looked for protection from the sun, wind and rain, as well as protection from wild dogs and other predators. The biggest improvement is the fact that animals now have fresh air and sunlight. Before they were kept in a dark house, without ventilation or light,” said Santman.

At an estimated value of $7-$10 per live chicken or rabbit and 20 cents per egg, future cooperative sales will also give Matembela and the other women here a chance to pay for their children's education. Currently, school fees and supplies alone are a prohibitive sum for most.

Beyond the immediate advantages for the women, Juan Carlos Bonilla emphasizes the special nature of this project: the fact that, once rolling, it can be easily self-sustainable, and also replicable.

“This is a prototype, which in 2011 we intend to export to other communities near the nature reserves as well,” Bonilla says. “They will all have their own dialogue committees and decide what kind of community-related activities best suit their needs. We also want to export the model to schools. This way we’ll get children to raise animals and inherently learn about conservation from an early age.”