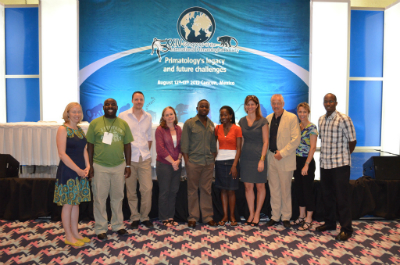 The Dian Fossey Gorilla Fund enjoyed an especially high profile at the International Primatological Society’s 2012 congress, held in Cancun, Mexico in August. Because 2012 marks the 45th anniversary of the Fossey Fund’s Karisoke Research Center, our staff organized a symposium to feature current and previous Karisoke scientists, including four Rwandan scientists, who presented an overview of the center’s contribution to the field of primatology and its current research on the mountain gorillas and other biodiversity in the region. In addition, Biodiversity Program Coordinator Deogratias Tuyisingize presented research on Karisoke’s work on golden monkeys, in a separate session.
The IPS congress, held every two years, brings together primatologists from all over the world. Its theme for 2012 was “Primatology’s Legacy and Future Challenges,” which was especially relevant to Karisoke. The symposium: “Mountain Gorillas (Gorilla beringei beringei) Then and Now: Celebrating 45 years of Research at the Karisoke Research Center” was organized by Tara Stoinski, Ph.D., Dian Fossey Gorilla Fund’s vice president and chief scientist.
“Since Dr. Dian Fossey established Karisoke to gain insights into the evolutionary origins of humans, the center has helped advance our understanding of a broad range of topics, including social behavior, population dynamics, feeding ecology, reproductive strategies, life history decisions and conservation,” says Stoinski. “The symposium touched on many of these. In addition, a common theme connecting the individual presentations was the importance of Karisoke’s long-term datasets for answering questions about the social and ecological adaptations that have shaped primate evolution.”
Dieter Steklis, Ph.D. and Netzin Steklis, a former Karisoke director and researcher, respectively, opened with “Forty-five Years of Research at Karisoke: Its Influence on Primatology.” The eight talks that followed focused on highlighting the variety of work currently being done at Karisoke. The majority of talks focused on gorilla research and included topics such as inbreeding avoidance; female reproductive success; home range patterns; sibling relationships; long-term partner preferences; socioecological influences on females’ energy gain and expenditure; and individual gorilla personalities. The symposium ended with a study of female relationships among golden monkeys to highlight research that is being done on other biodiversity in the Virunga region.
Karisoke Director Felix Ndagijimana described Karisoke’s current research on mountain gorilla ranging patterns. Over the last decade, dramatic changes in the number of gorilla groups in Volcanoes National Park and their home range sizes and locations have provided new insights into mountain gorilla behavior and ecology. Ndagijimana says, “The IPS Congress was an opportunity to celebrate Karisoke’s history and share what new research can come out of our long-term datasets as we continue to make unprecedented discoveries about mountain gorillas. Our biodiversity research and conservation program has also been producing some great studies and important findings. It was important to us to publicize the work we have been doing on the entire ecosystem of Volcanoes National Park, not only the gorillas.”
Representing the Biodiversity Research Program, Deo Tuyisingize gave a talk entitled “Is the Golden Monkey (Cercopithecus mitis kandti) population declining in Volcanoes National Park, Rwanda?” based on his comparison of a 2007 survey of the golden monkey population in the park with one he performed in 2011.Tuyiszingize said the talk was well-attended and inspired fruitful conversations with other primatologists, especially specialists in monkey research. They suggested several research initiatives that could be carried out by the Fossey Fund.
For Tuyisingize, this opportunity to exchange ideas and network with other specialists in his field was the most exciting part of the trip. He says he came away with a broader sense of what others in the primate conservation community are doing, how the Fossey Fund’s research priorities compare with those of other organizations, and how he could improve his own research questions. Most importantly, Tuyisingize feels he gained further knowledge about other primates which will help in golden monkey studies, and that he strengthened his existing networks and gained new contacts who will be able to provide future input and recommendations.
The diverse group of scientists who addressed the symposium included post-doctoral researchers Stacey Rosenbaum, Ph.D. and Cyril Grueter, Ph.D.; long-time collaborator Martha Robbins, Ph.D., of the Max Planck Institute; and Research Assistants Jean Paul Hirwa and Bernadette Arakwiye, as well as Ndagijimana, Stoinski, Dieter Steklis and Tuyisingize. Collaborators on the studies presented included former Karisoke director Katie Fawcett, Ph.D. and former researcher Netzin Steklis; Winnie Eckardt, Ph.D.; Gorilla Program Director Veronica Vecellio; Research Assistant Didier Abavandimwe; global information system specialist Anthony Giarusso of Georgia Tech; and Dian Fossey Gorilla Fund Board Chair Nick Faust of Georgia Tech.