The Fossey Fund has recently suffered two significant personnel losses at both our Atlanta headquarters and in Rwanda. On Dec. 2, Fossey Fund staff member Theogene Niyibizi died after being involved in a car accident, and on Dec. 5, former chief development officer Beth Smith died peacefully at her home after a long battle with cancer. 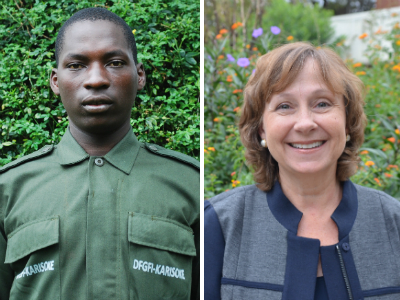 Theogene, who joined the Fossey Fund in 2009, worked as a cook in Bisate, where our staff are based, and was the son of Karisoke Research Center tracker J.D. Zirimwabagabo. "Theogene was an exemplary employee who always fulfilled his duties, who was reliable, and was always present to assist his co-workers,” said Felix Ndagijimana, director of the Karisoke Research Center. “He was one of those who worked behind the scenes to make the work of the Fossey Fund possible. We will miss his energy, willingness to help and most of all, we will miss his smile.” Theogene is survived by a wife and two children.

Beth worked with the Fossey Fund as a fundraising consultant for 15 years before becoming its chief development officer in 2010. During that time, Beth helped to raise the presence of the Fossey Fund in the global conservation community and helped grow a worldwide base of supporters.

President and CEO Tara Stoinski. Ph.D., said, “Beth was an integral part of the Fossey Fund and her expertise in fundraising helped us become the organization we are today. But it was her passion about our mission of saving gorillas and helping the people who share their habitat that made her truly great at her job. She will be very much missed.“

Prior to joining the Fossey Fund, Beth worked in other fundraising positions and created Development Resources Unlimited, designed to provide nonprofits with temporary fundraising staffing solutions, office management and more. She was also an active community volunteer and served in various leadership positions.

“Beth held a significant role within our organization and also for me personally. She was a fundraiser to the end and was my right hand in fundraising for 25 years. Beth’s experience, commitment, drive, and inventiveness will be hard to replicate and will be dearly missed,” said Clare Richardson, Fossey Fund President Emeritus, Strategic Initiatives Officer.

Beth is survived by her three children, two brothers, and an aunt and uncle. In lieu of flowers, Beth requested donations be sent to the Fossey Fund or the Ovarian Cancer Research Fund. The Fossey Fund is deeply saddened by these two losses, and we extend our heartfelt condolences to both families.