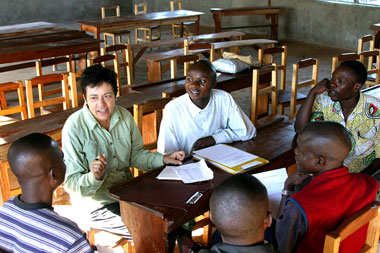 For six days in May, 34 students from the communications department of the Tayna Center for Conservation Biology (TCCB) scrambled across campus taking turns directing, filming, editing and even acting in their own conservation videos. They hauled tripods into the forest, scripted dramatic scenes and dressed as poachers and park guards. Their goal: to produce conservation videos that will engage their communities and ultimately make a difference.
The Tayna Center for Conservation Biology is a program supported by the Dian Fossey Gorilla Fund, providing college-level conservation education for local students in the Democratic Republic of Congo. It is named after the Tayna Gorilla Reserve, one of a string of community-based reserves in Congo that DFGFI works with.
This hands-on video production workshop taught students how to identify a single conservation issue, plan a production, videotape the elements needed to tell their story, and edit those elements into a final 4-to-8 minute piece.
The workshop was organized by the International Conservation and Education Fund (INCEF) in collaboration with DFGFI. INCEF is a nonprofit organization dedicated to integrating conservation and health through communication.
“We wanted to show students the power of video and how to incorporate it into their public awareness work,” says Cynthia Moses, founder and executive director of INCEF. “Our goal is to demystify the media so that everyone understands that this isn't rocket science. By the time they finish the workshop, every student has the basic skills to make a film.”

Working in four groups, the students spent the first day defining their messages. The brainstorming sessions generated multiple ideas, which the participants narrowed down and refined over the course of discussions. Once topics were chosen, the students were challenged to think creatively: What images and sound would best tell their story? Would they use interviews, drama, or narration? Would they include music?
Shooting began the next morning, after some time was spent practicing how to use a video camera. Over the next few days, students filmed across the campus and beyond, traveling to a local primary school and into the forest to capture the images needed to tell their stories. Those who chose to use drama to convey their messages came prepared each morning in costume and with props.
The students learned to use Final Cut Pro and iMovie to edit their videos. During the editing process, they learned to sift through hours of footage and make a rough cut, choosing the key scenes that would best convey their messages. Once they'd selected their takes and put them in order, the students refined their clips, added transitions and sound. They decided whether or not they needed to re-shoot scenes, add new images or interviews, or use narration and music to tell their stories.
“It's hard to believe that after all the film we shot, we were able to actually make a film,” says Odon Numbi. “We learned to manipulate the camera and computer. And we learned to turn an idea, a conception, into something concrete.”
The workshop demonstrated the potential and power of video to communicate conservation messages on a grassroots level. In the end, students produced five short conservation programs that addressed real community concerns and focused on the importance of engaging all members of society to preserve the country's natural resources. The student videos were screened during the final evening of the workshop to a large and enthusiastic audience of TCCB students and people from the surrounding community.
Most significantly, the workshop formed the first step of a communication process. It encouraged the students to think more carefully about the messages they want to transmit and more creatively about the ways they can use images to engage others in their conservation efforts. The student participants not only developed technical skills, but also now more fully understand how they can personally play a role in educating their communities about conservation. Subsequent workshops will enable students to master these skills and grow more confident as communicators.
In the end, it is not only the students who are expected to benefit from the workshop. Says Jean Pierre Kakule Katumwa, General Director of the TCCB, “The students have learned skills that they will use not only to help their own communities but also to benefit the whole country.”