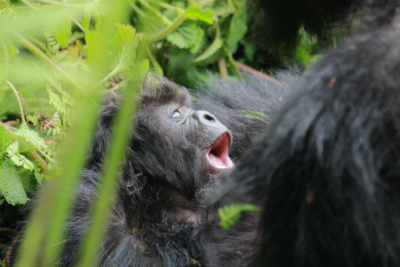 Once female mountain gorillas are old enough to reproduce, they usually have offspring approximately once every four to six years. This turns out to be an average of three to four infants during a female’s lifetime. This low reproduction rate makes it difficult for the species to recover from population setbacks. It also makes it unlikely that our staff, even though we monitor gorillas every day, will actually witness a gorilla birth taking place, let alone two. But Fossey Fund data technician Antoine Sekabanza has had that rare experience, seeing two gorillas give birth: Imvune with Ndizeye in 2012 and Kurinda delivering her second infant on Nov. 17 of this year.

“I feel lucky to witness this event, which is rare to see among mountain gorillas,” Sekabanza said. “I realized how much they resemble humans during such a painful but rewarding event.”

At 1:25 p.m. on Nov. 17, Sekabanza and trackers heard screaming as members of Ntambara’s gorilla group were moving downhill. This is one of the groups the Fossey Fund monitors daily. While the group was moving, Kurinda kept alternating her stance from sitting to standing, which reminded Sekabanza of the behavior mother Imvune exhibited before she gave birth to Ndizeye. He decided to keep following her closely.

During the next five minutes, the gorillas moved downhill 200 meters. Whenever Kurinda stopped, the other gorillas stopped too. At 1:30 p.m., Sekabanza saw Kurinda crouch down, and she gave birth shortly after.

Members of Ntambara’s group seemed to be interested in the birth too, with young gorillas approaching and showing some display behaviors. This was similar to what was observed in 2012, when dominant silverback Rano displayed as other gorillas approached mother Imvune right after she gave birth. On this new occasion, silverback Ntambara performed a non-directional chest beat after Kurinda gave birth. At 1:40 p.m., the gorillas of Ntambara’s group began moving downhill again. Kurinda quickly cleaned the infant and moved with the group.

The Fossey Fund feels fortunate to be able to learn from these observations and for Sekabanza to have seen such a rare occurrence twice!