Years after Dr. Dian Fossey’s life was cut short, her impact on conservation and dedication to mountain gorillas still inspires people around the world. Beatrice Burgo, who lives in France, is among the many people who were influenced by Dian Fossey’s passion. And, Burgo has begun a tradition to honor her hero by visiting Rwanda every other year.

Burgo, like Fossey, was passionate about animals beginning at a very young age. She initially dreamed of becoming a veterinarian but financially was unable to. Still, she continued to educate herself about animals and became interested in apes. “Everything about gorillas captured me; I was subjugated by them,” Burgo says. 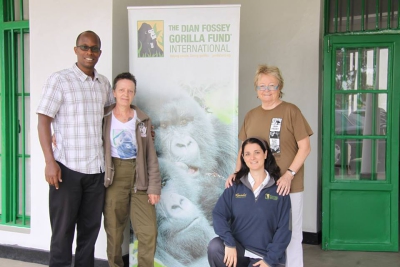 She first read about Fossey in an article when she was just 12 years old. Although in the article Fossey was labebed as reckless for going to Africa to study mountain gorillas, Burgo took the article as a sign to keep learning about gorillas — and about Fossey. Burgo says she never stopped looking for information about Fossey, despite limited access in France at that time. She also began to visit zoos to observe western lowland gorillas.

When the death of Fossey was announced on the radio on Dec. 26, 1985, Burgo describes it as the saddest of news: “The woman I admired most, after my mother, was murdered. The news was like losing a member of my family.” From that day forward, Burgo made it her goal to one day visit Rwanda and see the gorillas Fossey dedicated her life toward saving.

In September 2010, Burgo finally reached her goal and traveled to Rwanda to observe the gorillas as a 50th birthday present to herself. She was able to trek to see two different groups, feeling Fossey’s presence with her as she climbed. When she reached the gorillas, she was overcome with emotion and was unable to take any photos for 20 minutes because of the tears in her eyes.

During this stay, Burgo was unable to visit Fossey’s grave and was devastated, vowing to return again. In 2012, Burgo returned to Rwanda to revisit “Dian’s gorillas” and was finally able to pay homage to her inspiration and bring flowers to Fossey’s grave.

“Rwanda became my heart country and its inhabitants my second family,” Burgo said.

In September 2014, Burgo returned again and was able to meet with Fossey Fund staff Felix Ndagijimana, Veronica Vecellio and Clare Richardson. Burgo describes her most recent visit with the Fossey Fund as one rich with emotions and beautiful encounters.

“I know the daily work done by each member of the Fossey Fund and for that I support — with what I can — the team that works hard to carry on the work and the research of Dian. This is my way to help, my friends, the gorillas to survive.”