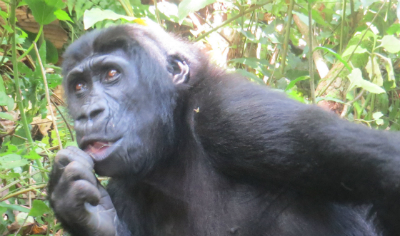 The GRACE (Gorilla Rehabilitation and Conservation Education) Center in the Democratic Republic of Congo was founded in 2009 by the Dian Fossey Gorilla Fund and partners to help young orphaned Grauer’s gorillas who were left without their natural groups after being rescued from poachers. Part of planning for the future of these young gorillas involves preparing them for potential reintroduction into the wild, including having them live in a group setting to learn normal social behaviors and many of the skills necessary to survive.

To prepare for their next steps, work began several years ago on securing a 24-acre swath of forest next to the GRACE facility (which consisted of an indoor holding area and an outdoor yard) that would be able to serve as a training area, where the gorillas could engage in natural behaviors, seek out all the plants that compose their diet, learn to travel and make night nests, and become comfortable in a wild setting.

Construction of a long outer and inner electric fencing system is now nearing completion and will undergo various tests before the gorillas are introduced to the area this autumn. The perimeter of the outer fence is 1.3 kilometers and consists of 21 electric wire strands, which had to be imported from Nairobi, around that entire area. However, it was decided that an inner fence was also needed just inside the outer fence, to make sure that even the most curious of the gorillas couldn’t reach the main fence. So, a two-strand fence designed to run on a different electrical system was also constructed and placed inside the main fence. 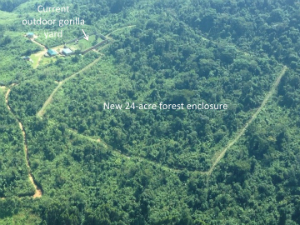 On the main fence, every other wire is on a different system, so if there is a power outage, the majority of the wires will still work. All of these wires on run on solar power, since there is no regular electrical power at GRACE other than the limited amount provided by generators.

The main fence wires are strung between 370 iron posts that are approximately 4 meters high and 3-1/2 meters apart. Each post was sunk 1 meter deep into the ground, into holes that were hand-dug on the steep mountainside, which had been cleared by hand. Each post was secured into its hole with concrete and then painted with anti-rust primer and metal paint. On each post 21 insulators were riveted into place to hold the electric wires.

A variety of safety checks and tests are now underway, to prepare for the gorillas’ introduction to the area.

Construction of the fence also led to the need for building several observation platforms, as well as a corridor for getting the gorillas from their indoor enclosure into the forest. Six observation towers will be used to keep an eye on the gorillas and for researchers to track their behaviors. Each will hold two people and be made of iron with a corrugated roof. A larger observation platform with a spotting telescope is also being planned.

In addition, a special corridor had to be built in order to get the gorillas safely from their current small outdoor enclosure into the new forested area. This is an 8-meter-long structure built with mesh panels and a gorilla-proof sliding door, as well as a human-access door from the outside to allow for maintenance and cleaning.

Getting the gorillas ready

The next step involves preparing the gorillas for the new skills and routines they will need as they take this next step toward a more natural life. In recent weeks they have been practicing stationing themselves to leave their current yard and wait in different areas, so they don’t all rush at once through the access corridor. Initially they will keep their current routine of sleeping inside at night, but ideally one day will sleep outside in nests, like wild gorillas. For now, the ringing of a musical triangle is their signal to come inside for feeding.

What the future may bring

Grauer’s gorillas once lived in this forest freely, and it still contains the plants needed for their diet and wellbeing, so it is hoped that the gorillas will eventually fully adapt to this new living area. Living in such a large natural setting is yet another step on their way toward a wild future. Scientists are making plans to study their progress and determine the best next steps for these young gorillas, in conjunction with the local community around GRACE and other stakeholders.

The Dian Fossey Gorilla Fund is proud to have played a key role in founding GRACE and starting the search for unique long-term solutions to saving this important species. For more information about GRACE and its partners, please click here.