Giraneza’s Group Involved in Another Interaction

Today the Dian Fossey Gorilla Fund field staff witnessed another interaction involving Giraneza’s group. This is the same group that lost a female (Nyandwi, who transferred out) and an infant (who was killed during an interaction) last week during an encounter with with Isabukuru’s group. 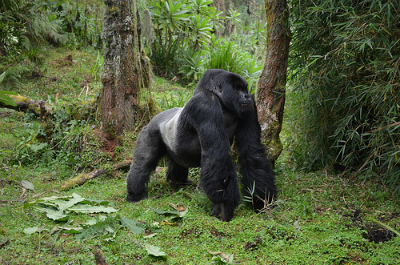 Today the interaction was with the Titus group. The interaction went on for three hours, during which silverback Giraneza displayed frequently to the four silverbacks of Titus group. The situation was tense and all of the silverbacks exchanged chestbeats, smashing vegetation, hitting the ground and charging at each other in a typical series of antagonistic behaviors. The silverbacks were also hooting and pig grunting loudly to threaten the opposing individuals.Female Taraja, from Giraneza’s group, was still holding the corpse of her infant who was killed during last week’s interaction with Isabukuru’s group.

Searching for the dispersed female Nyandwi could explain why Giraneza approached the Titus group, instead of avoiding further stressful situations. Both Giraneza and Taraja were making calling vocalizations, with long and repeated “hoooohoooohooo” sounds, suggesting a search for Nyandwi.

The interaction with the Titus group ended at 10:40 a.m., when the groups moved in opposite directions. Giraneza and Taraja were still making calling vocalizations at that time. During the interaction, Taraja tried one time to join the Titus group but Giraneza stood up in front of her, dragging her away. She finally followed Giraneza, still carrying the corspe of her infant on her back.