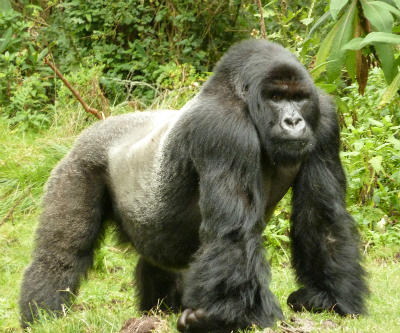 The mountain gorilla group called “Giraneza,” which is monitored by the Dian Fossey Gorilla Fund’s trackers and scientists, has not had an easy summer. By the beginning of June, the group was one of the smallest that the Fossey Fund monitors, with only four gorillas, including silverback Giraneza, two adult females, Nyandwi and Taraja, and Taraja’s new infant, born on March 22. The group has undergone serious trauma and change over the past two months.

Their troubles began on June 15 shortly after 9 a.m., when silverback Isabukuru, who leads a different group, approached Giraneza’s group, making aggressive displays. Minutes later, several other gorillas from Isabukuru’s group joined in the interaction, including subordinate silverback Kubaha. Kubaha attacked Taraja and her new infant, kicking and dragging them. Taraja made long, loud screams, as her infant was killed during the violent interaction. While the interaction continued, with gorillas in both groups making aggressive displays towards each other, Taraja grabbed her dead infant and ran behind Giraneza. At 10:40 the interaction finally ended, when Giraneza decided to leave the area. Taraja followed him, still carrying the infant’s body, but Nyandwi stayed with Isabukuru’s group.

In the days following the interaction, the Giraneza group, now down to only two gorillas, travelled a long distance in the park. On June 20, the Giraneza group was involved in yet another violent interaction, this time with Titus’s group. Giraneza approached Titus’s group around 7:30 a.m., making aggressive displays. The interaction was very tense and lasted for about three hours. All four of the Titus group silverbacks faced Giraneza, as they exchanged displays including chest beating, smashing vegetation, grunting, hitting the ground and charging at one another. Both Giraneza and Taraja were also making loud, repetitive vocalizations.

Fossey Fund research assistant Jean Paul Hirwa, who witnessed the interaction, commented on the incident: “The group has already gone through so much stress, so in a sense it is strange that Giraneza would initiate this interaction with Titus’s group. But it is likely that Giraneza was searching for the dispersed female Nyandi. The long hooting vocalizations that Giraneza and Taraja were both making were presumably calls for her.”

At the end of the interaction, Taraja, who was still carrying the body of her dead infant, tried to join Titus’s group, but Giraneza stood in front of her and dragged her away. She eventually followed him and they left the area.

The Giraneza group formed in early 2012, when Giraneza acquired the two females from Inshuti’s group. However, the group went missing in September 2012, and was assumed to have crossed the park border into the Democratic Republic of Congo. The group was first seen again in Rwanda in January 2013, but it seemed they were still moving back and forth across the border regularly. It wasn’t until early March 2013 that the group seemed to be back in Volcanoes National Park full time, and full-time monitoring resumed.

Since the interaction with the Titus’s group, the Giraneza group has been travelling long distances in the park again. They have gone missing for weeks at a time, and it is unclear whether they remain in Rwanda or have crossed to the lesser-populated area across the DRC border, where violent interactions might be less likely to occur. The group’s future is very tenuous at the moment, with Taraja having shown signs of wanting to transfer to another group and with Nyandwi already well integrated into Isabukuru’s group. Giraneza’s struggle to maintain his own small group continues. Everyone at the Fossey Fund is watching closely to see what will happen to Giraneza’s group. Only time will tell.