A census is extremely important to estimate population size and dynamics as well as the conservation of a species. It is also a difficult process that takes patience, persistence and a large team of workers, from team leaders and field staff to porters and cooks. The work itself involves long days hiking along steep terrain, sometimes in poor weather conditions. Gorilla population estimates are based on night nest counts and fecal sampling. 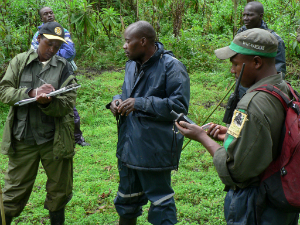 From March 1 through April 27 of this year, a large collaboration took place among national park authorities, international conservation organizations and research institutes in order to complete the latest mountain gorilla census throughout the Virunga Massif. The Dian Fossey Gorilla Fund International took a major role, providing staff from the Karisoke Research Center as well as support and expertise.

Each census team included approximately five members. A three-day training period took place before the census began, so that team leaders and assistants could learn mapping and GPS skills, methodology, sample collection and data entry. Karisoke Director Dr. Katie Fawcett was among the senior scientists who helped throughout the process, providing support, training and advice. 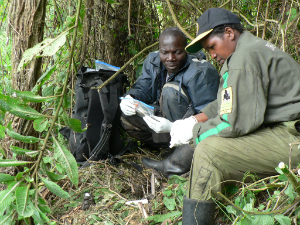 According to Theodette Gatesire and Jean Paul Hirwa, gorilla research assistants from Karisoke who participated in the census, a typical day started at 6 a.m. and lasted for 10-12 hours. The first goal was to reach the specific transect zone for the day. The teams would then use the census methodologies that they learned to “sweep” the area. This method is used to make sure that no gaps are left within a given transect and all signs of gorillas (nests, dung, paths) are accounted for. Every 250 meters a GPS reading was taken, as teams moved in one specific compass direction. Along the way, they stopped to record any signs of wildlife, poaching activities and actual animals seen. When a fresh gorilla path was located, teams followed that path until they reached the night nests. At the nests counts were taken, as well as fecal samples.

“Some of the most difficult hardships surrounding this census included the constant bad, rainy weather and deep ravines that always got in the way of our transects. But I learned many things as a team leader, including major leadership skills, mapping methods and conducting a census,” says Gatesire.

Despite the hardships, the teams persisted daily. They were able to explore all sections of the Virunga Massif, observe wildlife, and meet people from different countries and cultures, as well as participate in mountain gorilla conservation efforts. Teams came across both habituated and unhabituated gorilla groups, poaching camps, evidence of logging activities, and snares. Whenever teams found snares they destroyed them and carried them out of the park. One team even discovered an elephant carcass with the tusks removed. This was further evidence as to how crucial such work is for conservation.

“The census was a great opportunity to learn and acquire field work experiences. But the most interesting part of the census was the ability to further study gorilla ecology and to be able to participate in gorilla conservation,” says Hirwa, who was an assistant to the team leader during two phases of the 2010 census.
Results of the 2010 mountain gorilla census are now being analyzed and a full report is expected later this year. It will be interesting to learn whether there have been any significant changes since 2003.