Gorilla Data Helps Show How Age Affects Us All 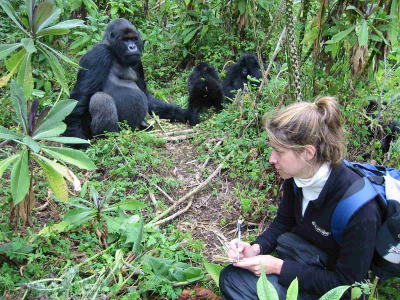 A major study just published in the journal Science suggests that the aging process in humans is similar to that of other primates. And the long-term database on the mountain gorillas maintained by the Fossey Fund’s Karisoke Research Center in Rwanda played a key role in determining this.

Previously, it was thought that humans aged more slowly than other animals. Early studies using domestic and laboratory animals, such as rats, mice, and dogs seemed to confirm this. But now, the first-ever multi-species comparison of human aging patterns with those in gorillas, chimps, baboons, lemurs and other primates living in natural (wild) settings, suggests that human aging patterns may not be so different.

The findings appear in the March 11 issue of Science. Fossey Fund scientist Dr. Tara Stoinski, the Pat and Forest McGrath Chair of Research and Conservation, is co-author, and worked closely with the other research partners to determine how to merge and analyze all the data sets.

“Using data from other long-lived animals in natural settings (unlike the laboratory) is really critical for understanding the evolution of aging; you want to study aging in the habitat in which it evolved, the habitat with predators, parasites, food shortages, and other normal conditions,” says Dr. Stoinski.

The researchers combined data from long-term studies of seven species of wild primates, including: capuchin monkeys from Costa Rica, muriqui monkeys from Brazil, baboons and blue monkeys from Kenya, chimpanzees from Tanzania, mountain gorillas from Rwanda, and sifaka lemurs from Madagascar. All of the databases aside from the Fossey Fund’s came from major research universities, including Duke, Princeton and Columbia. In fact, the group has formed an ongoing team, which is also studying other issues and has already published two other scientific papers, with still more to come.

In this study, the team focused not on the inevitable decline in health or fertility that comes with advancing age, but rather on the risk of dying. When they compared human aging rates — measured as the rate at which mortality risk increases with age — to similar data for nearly 3,000 individual monkeys, apes, and lemurs, the human data fell neatly within the primate continuum.

The results also confirm a pattern observed in humans and elsewhere in the animal kingdom: as males age, they die sooner than their female counterparts. In primates, the mortality gap between males and females is narrowest for the species with the least amount of male-male aggression.

This study shows how valuable long-term databases are, such as the one started by Dr. Dian Fossey at Karisoke and continued now for more than 40 years, and the others in this study. “Each of these studies has been painstakingly collecting data for decades to amass the information that was included in this project,” says Dr. Stoinski. “And despite that, in the end we were still limited about what we could say about mortality patterns at the oldest age classes because of sample sizes. We have been watching gorillas for 40 years yet still don’t have a lot of data on older animals of known ages.”

The National Evolutionary Synthesis Center (NESCent) is a nonprofit science center dedicated to cross-disciplinary research in evolution. Funded by the National Science Foundation, NESCent is jointly operated by Duke University, The University of North Carolina at Chapel Hill, and North Carolina State University.