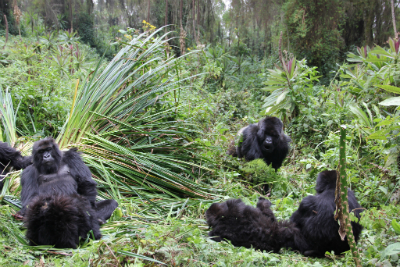 After a sequence of tremendously stressful events, which left Isabukuru’s group of mountain gorillas dealing with the fallout of one infanticide, one severely injured infant, two female transfers, intense interactions with other groups, and one veterinary intervention, the group has avoided human proximity for almost the entire first half of the year.

For many weeks following these traumatic events, Fossey Fund trackers tried to locate and approach the group but the only reaction they received were powerful charges and loud screams from the two silverbacks, Isabukuru and Kubaha.

The group traveled exhausting distances up to the alpine zone of Mount Karisimbi, in an area very difficult to reach and characterized by dense thorny bushes. Trackers even lost track of the group for many days and once they did finally relocate them, they were again stopped by the silverbacks.

Fossey Fund staff had no choice then but to re-start the habituation process. Initially they stayed at some distance from the group, carefully avoiding being heard by the gorillas. Then, gradually the distance was reduced and closer observation was tried again.

By May, Isabukuru was finally re-accepting our trackers close to his group, but he was still visibly nervous and alert. Routine behavior data collection resumed in June and since then the group has been followed every day. Now, our data technicians can again follow specific members of the group to record information, without being intimidated by aggression from Isabukuru. The group has apparently finally returned to normal.

All the individuals of the group appear to be in good health, including the newborn, who was named “Masunzo” at the gorilla naming ceremony on July 1. We are thankful for the dedication and patience of the Fossey Fund trackers of Isabukuru’s group who made this “re-habituation” possible and happy that the group dynamics are returning to normal again.