Outline of a gorilla group interaction 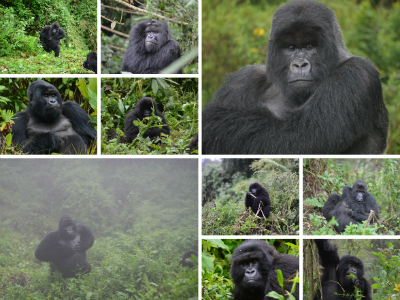 Fossey Fund trackers and researchers monitor gorilla groups every day, and this includes collecting information on the gorillas’ behavior. Sometimes this is not a simple task, such as when a group interacts with another group. When we witness this, we try to record all the behaviors seen. Here is an excerpt from our detailed notes regarding one interaction, which took place in June between Titus’ group and Isabukuru’s group.

The interaction started at 11:15, when Kubaha displayed at Segasira who replied by screaming. Immediately, Pato, Urwibutso and Kurudi approached Segasira. Pato went close to him while Urwibutso stayed 5 meters away with Kurudi. Pato didn’t react, but watched.

At 11:23, Segasira displayed at Mushya followed by a hit at 11:24, and Mushya replied by dragging him.

At 11:35, Kubaha displayed at Urwibutso who was still with Kurudi, 5 meters from Kubaha and he replied by taking the strut stance posture.

At 11:40, Isabukuru approached the interaction site, Nyandwi and Isaro followed him and the group was still in 8 meters.

At 11:44, Isabukuru did a pig grunting vocalization at Isaro but the females ignored and kept following him and at 11:46, Isabukuru hit both Nyandwi and Isaro; they returned to their group.

At 11:47, Kubaha displayed at Segasira and at this same time, Sakara was playing with Ndizeye.

At 12:00 p.m., Isabukuru approached Titus’s group and he displayed at the group but Titus’group ignored.

At 12:06, Isabukuru stood in strut stance position at Titus’group and Titus’group individuals only watched him. They were separated by 7 meters.

At 12:39, Segasira followed Urwibutso and moved with the group in Muntu direction while Mushya went joining the group at 12:40 p.m. and they all moved feeding in Rutaka direction.

At 12:41, both groups were still moving Titus’ group in Muntu direction while Isabukuru’s group was moving in Rutaka direction and were separated by 150 meters. Trackers left them at 2:02 p.m., separated by 700 meters from each other. No transfers or wounds occurred during this interaction.