The Dian Fossey Gorilla Fund field staff are happy to report that 26–year-old female mountain gorilla Mudakama, from Pablo’s group, give birth for the fourth time on June 19. This birth has increased Pablo’s group to 36 gorillas. It is the largest group of mountain gorillas despite the size reduction that occurred in April 2013, when seven gorillas left to form an independent group. 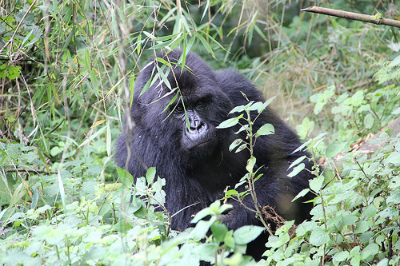 Mudakama was born in Susa’s group, to mother Cyiza. She transferred to Pablo’s group in 1995 when she was 9 and gave birth to her first infant a year later. This infant was named Bikereri, after a hill in the forest where the group was ranging at the time. There was an unusually long inter-birth interval until Mudakama’s next infant was born, in 2004, named Agahozo. Teta, is the third infant of Mudakama, born in 2009. Teta is very attached to her mother and often stays close to her for long sessions of grooming and physical comfort.

Mudakama has all of her offspring living together in Pablo’s group. It is a very close family and it is common to see all the members resting together in close proximity to dominant silverback Cantsbee.

In other gorilla news, Fossey Fund trackers and researchers observed some intense group interactions in the forest in recent days, involving Pablo and Musilikale groups, and Isabukuru and Giraneza groups. Unfortunately, during the latter interaction, the young infant of Taraja from Giraneza’s group became a victim of infanticide, as one of the silverbacks attacked Taraja.