Fossey Fund trackers report that three of the four gorillas from Gushimira group (Faida, Kanama, and Kanama’s infant Kwigira), who had traveled away and temporarily joined Ugenda's group earlier this week, are now back with silverback Gushimira and all seem to be fine! The group was seen to be calm and no unusual behaviors were noted. The nest count showed that they had spent the night together. Female Bishushwe is also in the group. 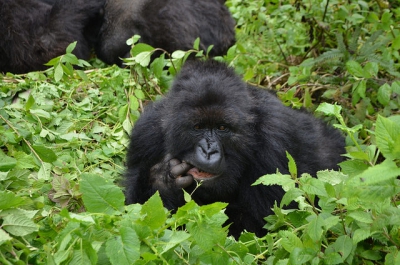 Female Ukuri has stayed behind in Ugenda's group but does not seem fully integrated there yet. She moves around a lot and the silverbacks of the group follow her. For a while yesterday, she and dominant silverback Ugenda were not with the group, but later rejoined them.