Here’s what we’ve been able to piece together: Yesterday, our trackers saw an interaction site between Gushimira and Ntambara groups on the slope of Mt. Bisoke. When they arrived that morning, they found that these two groups were separated and not interacting. But in Gushimira group, two females (Faida and Bishushwe) were missing. This led us to think that one of those females had transferred to Ntambara. The two groups were separated by 500 meters when trackers left later in the afternoon. 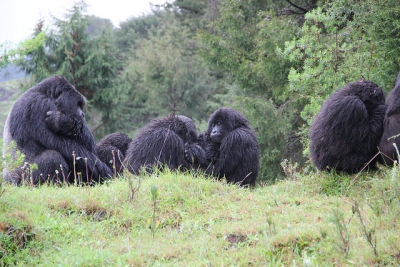 Today, four Gushimira gorillas (Ukuri, Faida, and Kanama with infant) were found on the trails of Ntambara group and their night nests were the only ones seen, which means that they were not even with Gushimira and Bishushwe yesterday evening.

Based on evidence from the trails, we suspect that Gushimira left his group later yesterday and kept following Ntambara group, traveling far from his group. Early this morning, the three females (with the one infant) had been on the Ntambara trails, but at some point they turned back and moved toward Ugenda group instead. We suspect they had been trying to avoid the interaction with Ntambara group.

When these females then arrived in Ugenda group, silverback Wageni displayed several times toward Ukuri with some physical aggressions. Since the other females — Kanama and Faida – have lived in and have relatives in Ugenda group, they were well received, with some affiliative behaviors. Elder female Maggie even embraced Faida. And dominant silverback Ugenda and Ubushake (Kanama’s elder infant now 7-1/2 years old) touched and embraced Kanama.

Silverback Gushimira and female Bishushwe (who we think had transferred temporarily to Ntambara before Gushimira got her back), were not seen today. If still together, they are the only remaining members of that group.

We will be closely monitoring these complex and interesting developments, so stay tuned! Will Gushimira be on his own? Will the new females still be with Ugenda? Where will Bishushwe be?