So many events occurred among the mountain gorilla groups monitored by the Fossey Fund in the past few days, including some interactions with other groups of gorillas that are monitored by the Rwanda Development Board.

Unfortunately, the 3-1/2-year-old Susuruka, who was not doing well and was visited by veterinarians twice last week, was found dead by our trackers on Saturday. A necropsy is being performed by Gorilla Doctors, to determine the causes of death, but she had been suffering from traumatic changes in her group and the transfer of her mother (Faida) out of the group. (See video here showing another youngster, Akaramata, helping Susuruka on one of her last days. www.youtube.com/watch?v=9s7WozjkQsE&feature=youtu.be) 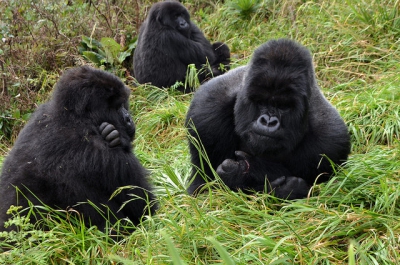 Then, this morning, Faida was found to have transferred yet again, leaving silverback Inshuti and joining Gushimira’s group (which had not been seen since Oct. 11)! Inshuti was seen 200 meters away with wounds on his arms and making hooting vocalizations.

This news was balanced by the arrival of a newborn in a different group (Ntambara’s), to mother Kurinda. This birth was especially exciting since our data technician Antoine actually witnessed the delivery!

Also interesting was an interaction between two big groups – Pablo’s group, which is led by silverback Cantsbee and monitored by the Fossey Fund, and Susa’s group, which is monitored by the Rwanda Development Board for tourism visitation. These interactions have occurred before and usually result in some transfers. This time it seems that three gorillas transferred from Pablo to Susa, although not all group members were seen at the time. Stay tuned for more details on the Pablo-Susa situation!