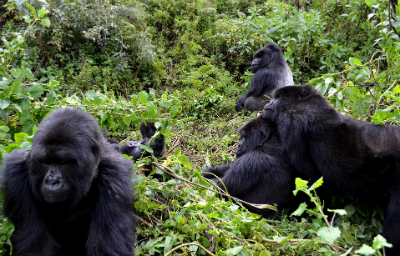 Dian Fossey Gorilla Fund trackers and researchers had a very busy holiday season, with a variety of interactions, injuries and other activities among the mountain gorillas and their groups. The season started with a serious interaction on Dec. 22, between an established group led by silverback Isabukuru and a lone silverback. When Isabukuru's tracker team reached the group that morning, they found the group interacting with a lone silverback called “Rukundo,” in the Rutaka area.

During the interaction, an infant was killed – the 8-month-old offspring of mother Bukima. The incident was not directly observed but Bukima was seen with blood on her chest and trackers subsequently found the infant’s body. Infanticide has been observed by Fossey staff over many decades to be a significant cause of gorilla infant mortality and is a strategy used by males to increase their reproductive success.

Another infant in the group, Icyororo, was seriously wounded during the interaction as well, with major injuries to his foot that would make his recovery unlikely without veterinary intervention and required consultation with veterinarians from Gorilla Doctors and park management (the Rwanda Development Board, RDB).

On Dec. 25, another incident occurred when 3-year-old gorilla Sabato became caught in a snare. Although he and other gorillas broke the snare’s rope away from its branch before trackers arrived, the rope had been pulled very tightly around his right wrist and needed to be removed.

As a result, there were now two interventions planned and carried out on Dec. 27. Sabato recovered quickly from the removal of the snare rope and has been seen back to normal since. However, keeping up with the status of young Icyororo has proven much more difficult, because the group, led by silverback Isabukuru, has not been allowing close approach by our trackers.

Group splits and reunites, others hard to find

In early January, our trackers found the group led by silverback Musilikale split into two, with young silverback Turakomeje taking the original group and Musilikale separated with two females (Muntu and Ubufatanye) recently acquired from Isabukuru’s group. This put stress on our teams, as we needed to cover this new group even if the split was only temporary. And indeed, a few days later the two parts of Musilikale’s group reunited, so our tracking could get back to a more normal situation. However, as many fresh snares were found in the area, our anti-poaching team is very busy as well. At the same time, the gorilla group led by Gushimira could not be located by our trackers starting on Dec. 26, so special teams were formed to help find them.