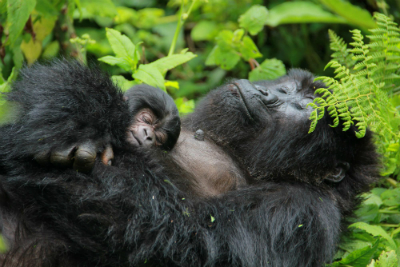 The most unpredictable gorilla groups of the past few months – Isabukuru’s and Gushimira’s – continue to surprise our field teams. On March 5, 2014, Isabukuru’s group, which had not been seen since Feb. 21, was accidentally found interacting with Musilikale's group, with whom they had already had a very serious interaction at the beginning of the year that resulted in the transfer of two females. The new interaction went on for the entire day, and the two groups were still together when the trackers left in the afternoon.

A few days later, we found that the females who transferred previously had gone back to their original group but, because of the dense vegetation of the place (the Kimbagira area, which is very far away), the trackers could not always see all the group members. However, during all this we happened to also see Inshuti and Shangaza, who had not been seen for a while but are fine. Inshuti, as usual, charged the trackers, who kept a safe distance!

On the same day, Gushimira's group, which had not been seen since March 3, was found to have interacted with Kuryama's group. The interaction was not observed but could be clearly reconstructed from traces. It went on for several kilometres until reaching a spot very close to the border with the Democratic Republic of Congo (DRC), where both groups spent the night just 50 meters apart, probably because they were exhausted. In the morning our trackers finally found Gushimira's group, still following Kuryama's group. The trackers left them as they were going too close to the DRC border. Kuryama's group wasn't seen but their traces were ahead and were clearly the traces of running and stressed gorillas.

By mid March, we had not again seen Kuryama’s and Gushimira’s groups, which we could tell had crossed into the Congo. Trackers continued to check the areas close to the border, but didn't find any new traces. We then began working with the park authorities (the Rwanda Development Board) to suggest a special patrol, which will require coordination with the DRC authorities as well.

A newborn in Titus’s group

On March 15, female Kubana from Titus’s group gave birth. This is Kubana's first infant and the second in Titus’s group since silverback Rano became the leader following Titus’s death.

We hope the infant will be able to cope with the season’s extreme cold and rain, and we also hope that it won’t be the subject of aggression. We say that because today we observed all of the group’s three subordinate silverbacks making displays against Kubana and the infant, sometimes hitting her. Kubana avoided their approaches but they were always behind her. The situation calmed down at resting time, as they all rested together. Dominant Rano was not close to her, which is unusual when there is a newborn present, and he ignored all the other silverbacks’ displays.