Gorilla infants get their official names in Rwanda

The 11th annual Kwita Izina gorilla-naming ceremony was held in Rwanda on Sept. 5 and featured a record-high number of 24 infant mountain gorillas named (six of whom were from groups the Fossey Fund monitors and protects). Kwita Izina was celebrated through traditional songs, dances, the entrance of gorilla-costumed youngsters and gorilla trackers, and speeches by various individuals, notably Rwandan President Paul Kagame. 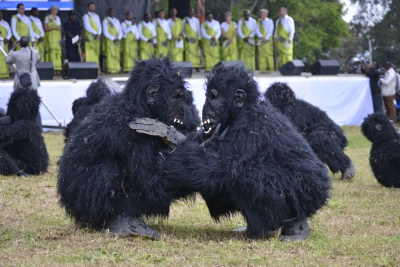 Twenty-four people including local officials, scientists and others were responsible for choosing the names for each gorilla, based on a list of suggestions from gorilla trackers. The infant gorillas monitored by the Fossey Fund were named as follows:

The week leading up to the naming ceremony included some additional special events. On Sept. 2, there was an official inauguration for the Bisate Learning Center, which the Fossey Fund helped create. Director of our Karisoke Research Center, Felix Ndagijimana, took part in the ribbon-cutting ceremony. Another event was a conservation conference in Kigali that included seven members of the Fossey Fund team.