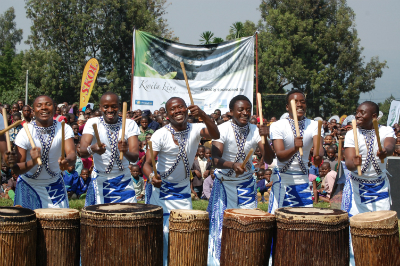 Under the looming peak of Mt. Sabyinyo and a pale blue-gray Rwandan sky, thousands of locals and international travelers alike gathered to celebrate the 10th annual Kwita Izina ceremony on July 1, 2014, and witness the naming of the 18 newest members of the ever-growing population of mountain gorillas in Rwanda’s Volcanoes National Park. The celebration was complete with performances by Rwandan singer Jay Polly and Burundian pop star Kidumu, as well as traditional Rwandan singing and dancing and several guest speakers, including the guest of honor, Rwandan Prime Minister Pierre Habumuremyi.

Amidst the excitement, however, the focus on the gorillas and the meaning of this important day for Rwanda was never lost. And, according to Valentine Rugwabiza, CEO of the Rwanda Development Board, “We have reasons to celebrate!”

For example, some $300 million have been raised over the last 10 years through entry fees to Volcanoes National Park, where the mountain gorillas live. Some 85 percent of these funds came from tourists purchasing permits to visit the gorillas. Rugwabiza also pointed out that 5 percent of the money goes back to communities surrounding the park, resulting in 57 primary schools in 13 districts being built over the years.

She credits the gorillas for this success, saying, “We are aware of their impacts on our tourism, our communities, our future.” She closed to much applause, stating that “gorillas are shy and peaceful. They are Rwandans.” And, thanks to protection from Rwandan park staff and the Dian Fossey Gorilla Fund, their numbers are increasing. 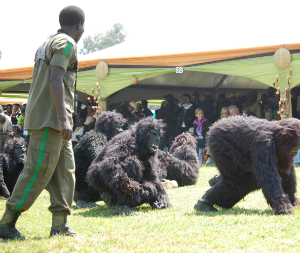 Like the trackers who monitor the gorillas every day, rain or shine, it was not difficult to see the ways in which the presence of the Dian Fossey Gorilla Fund was felt throughout the day. At times, this was in the form of heartfelt words of thanks given to the Fossey Fund by several speakers, including Rugwabiza. Photos of the gorilla infants taken by the Fossey Fund’s research assistants were used as official Kwita Izina pictures and the Fossey Fund’s trackers were asked to participate in the events, even pretending to “monitor” children dressed in gorilla costumes during the traditional symbolic procession.

Most significant, however, was that 10 of the 18 infant gorillas named this year were born in gorilla groups that receive daily protection and monitoring by the Fossey Fund. For example, a female gorilla infant in the Ugenda group was named “Nakure,” after the Fossey Fund’s only female tracker. The name also means “grow up” in Kinyarwanda, as everyone wishes this infant will grow up to increase the number of gorillas. She was named by United Nations Ambassador of Sport Tegla Loroupe of Kenya.

François Bigirimana, a popular guide among tourists in Volcanoes National Park, named a female infant from Pablo’s group “Kundurwanda,” which means “love Rwanda,” because gorillas attract visitors to Rwanda and are among the reasons for people to love Rwanda.

Other names given to infants born in the groups monitored by the Fossey Fund included: “Ndengera,” meaning “protect me” and “Kwigira,” meaning “self-resilience.”

Over the years, Kwita Izina has morphed into more than a one-day event, and the excitement of the festivities can be felt well in advance of the actual gorilla naming ceremony. This was the case this year, and the Fossey Fund was invited to participate in the other activities as well. On Sunday and Monday leading up to Kwita Izina, an Exhibition for Community Partners was held at Musanze’s stadium. Music and announcements from the stadium could be heard from all over, drawing people in. Community partners were asked to furnish a tent that demonstrated to the people of the town of Musanze how their efforts were benefitting conservation efforts as well as the community as a whole. Fossey Fund staff had an opportunity to speak with local children and community members about the importance of mountain gorilla conservation, show them the differences and similarities between a human and gorilla skeleton, and answer any questions people had. It was a time to celebrate the successes of the past year of hard work — complete with performances, singing, dancing, and more!

Ten years ago when all of this was just an idea on paper to encourage community involvement in mountain gorilla conservation, one might not have believed that it would turn into the biggest event held in Rwanda every year, a way to educate thousands of people about the connection between humans and gorillas and the importance of conservation, or to celebrate over 160 gorillas born and millions of dollars raised for Rwanda.

As seems fitting, therefore, one of the infant gorillas this year received a special name: “Birashoboka,” which means, “It is possible.”

Thank you to volunteer Fallon Frappier for submitting this story.