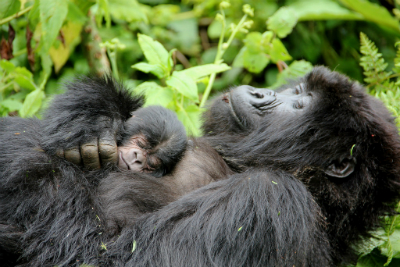 Four mountain gorilla infants have been born into the groups monitored by the Fossey Fund in Volcanoes National Park this year so far. Each of the mothers has a special story but sadly, one of the infants has since died. Our field staff is hopeful that the other infants will grow stronger and more independent each day under their mothers’ care.

At the age of 29, Bishushwe is the oldest gorilla in Ntambara’s group, which she joined early last year. Field staff watched her with particular interest, as her transfer into the group was traumatic on several accounts. For years, Bishushwe lived in Urugamba’s group, and the two were known for having a very close relationship. Urugamba died suddenly in January 2013, leaving his group without a silverback to lead them. Shortly after his death, the females and youngsters of Urugamba’s group encountered silverback Ntambara and his family and joined the group.

At the time, Bishushwe was the only female from Urugamba’s group with a very young infant, Amatwara. After being the subject of aggressive displays from the silverbacks in Ntambara’s group, Bishushwe hid from them in the vegetation, and later ran off into the forest on her own, probably trying to protect her infant, who risked being killed by the strange silverbacks. Fossey Fund field staff tracked Bishushwe during the month that she spent alone in the forest, empathizing with the difficult choice she faced.

Female gorillas do not travel by themselves in the forest, but in recent years the Fossey Fund has documented a few special exceptions, including Bishushwe. As a single female, any lone silverbacks or other groups she encountered on her own could be a threat to her infant. Eventually, Bishushwe gave up travelling on her own and joined Ntambara’s group. When we found Bishushwe in the group, she was holding Amatwara, who was already suffering from very severe injuries and who later died. It is very likely that the silverbacks of Ntambara's group had attacked Amatwara from the very first moment Bishushwe joined the group, but it is possible that the infanticide may have been caused by a solitary silverback whom she met while she was alone, right before she joined Ntambara's group. After observing Bishushwe’s amazing struggle to protect her infant, the field staff were dismayed to see this tragic outcome.

After watching such an unfortunate story unfold for Bishushwe last year, Fossey Fund staff were all immensely happy to see her with a newborn infant on March 31. Unfortunately, in mid-April, Bishushwe and her infant were not found with their group, and despite extra search efforts they were not seen for more than a week and seemed to be traveling alone again. Then, on April 22, they were back in their group and the infant, which she was still holding, was no longer alive. A necropsy will be performed to help determine the cause of death, which was not immediately apparent. 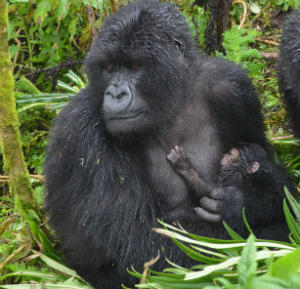 Tamu, a female in Pablo’s group, gave birth on April 14 to her third infant. Tamu has been a very successful mother in her nearly 18 years. Juvenile male Imbuto still lives with her in Pablo’s group, but her daughter Impuhwe recently transferred to Susa’s group, currently the largest group of gorillas in Volcanoes National Park.

Fossey Fund Research Associate Winnie Eckardt, Ph.D., remarked that Tamu can be quite wary around human observers compared to some of the other gorillas in the group. This is a characteristic she tends to pass along to her offspring. The Fossey Fund trackers and researchers who visit Pablo’s group each day have to be delicate as they follow Tamu and her family to collect data on their health and behavior.

Interestingly, Tamu was featured in an article recently published by Fossey Fund scientists in the journal Behavioural Processes. Field staff had observed Tamu using a bamboo stem like a “ladder” to help her infant climb a mound of vegetation. Tamu’s presumed tool use is one of very few cases ever observed among wild gorillas. We look forward to seeing Tamu continue her successful legacy as a mother.

Kubana was chosen as the Fossey Fund’s adult female gorilla ambassador for the 2013 cycle of adoptions. Originally offered for adoption as an infant, Kubana had such interesting life experiences as she matured that we decided to update her profile so that she could be “re-adopted.”
Born into Shinda’s group, Kubana stayed with her mother and silverback Ugenda when Shinda’s group split after the death of its leader. A few years after her mother died, Kubana transferred out of Ugenda’s group to join dominant silverback Rano in Titus’ group. Still young, at just 9 years old, field staff hoped to see her attain her next milestone and become a mother for the first time.

Indeed, on March 15, Kubana gave birth to her first infant. This is also a great success for Titus’ group because the infant is only the second to be born into the group since Rano became the leader. At first, Rano gave Kubana and the new infant some distance, and the subordinate silverbacks made several aggressive displays toward her, probably because Rano was not close by to police them. Fortunately, Kubana did a good job of protecting her infant on her own, and both are now healthy and peacefully integrated into the group.

On April 23, Ikaze from Isabukuru’s group gave birth to her second infant. Isabukuru’s group has been especially hard for our staff to monitor closely, due to recent changes within that group, including serious interactions with other groups, injuries and a medical intervention (with Gorilla Doctors), all of which caused great stress for the gorillas.

All mountain gorilla infants born since last summer will get their official names at the annual Kwita Izina naming ceremony in Rwanda in June.