Deep in the forest of Rwanda’s Virunga mountains, one gorilla mother is earning the title of “wonder woman.” Pasika is a 26-year-old mountain gorilla observed by the Dian Fossey Gorilla Fund and is traveling alone in the forest to save her infant, which is a very rare and remarkable behavior.

Normally, female mountain gorillas like Pasika spend their entire lives living in groups and rely on the adult male—called a silverback—to protect their young. If the silverback dies, the group may stay together if there is another male who can assume leadership; if not, females will immediately transfer to another group. They never live completely on their own – until now.

What mother Pasika is doing highlights the great empathy, intelligence, and adaptability of mountain gorillas. After the death of her group’s silverback Pasika never transferred to another group and she has been traveling alone in the forest with her 1-year-old infant– named Mashami – ever since her group disintegrated in May.

Pasika has good reasons for this behavior. When females with infants transfer to a new group, conflict often arises, leading to the death of the infant. This is called “infanticide” and is a common male reproductive strategy seen in many mammal species.  It serves to bring the female quickly back into reproductive condition to mate with the new male, which otherwise wouldn’t otherwise happen until the infant is completely weaned (at about 3 years old in gorillas). This exactly what happened with a different mother in Pasika’s group – her infant was killed when she transferred to another group.

Just as her human female counterparts around the world have stepped up to the plate this year to advocate for themselves and their families, it is clear that Pasika recognizes the risks transferring poses to her infant, and is avoiding doing so with extreme determination. However, the protection of an adult male and other group members is also critical for survival, so Fossey Fund staff are both worried and amazed at her behavior.

Initially Fossey Fund trackers and scientists continued to follow Pasika and Mashami on a daily basis, but she was clearly trying to avoid being noticed by both other gorilla groups and human observers, whom she knows well.  Even without daily tracking, Fossey Fund staff still see her frequently in the forest, and she and the infant seem to be in good health.

Still, since this behavior is so unusual – though heroic – Fossey Fund staff and scientists don’t know how long she can maintain it. She has already broken the records for solo traveling with an infant, at least in the Fossey Fund’s 50-year gorilla database.

“Pasika’s story proves that even after 50 years, there is still so much to learn about one of our closest living relatives,” says Dr. Tara Stoinski, President and CEO and Chief Scientific Officer of the Fossey Fund.  “In a year that has highlighted the incredible strength of women, Pasika has shown us that these feats of bravery are not limited to our own species.  And it also reinforces what we all know to be true for us humans – that there’s nothing quite as powerful in this world as a mother’s love for her child.” 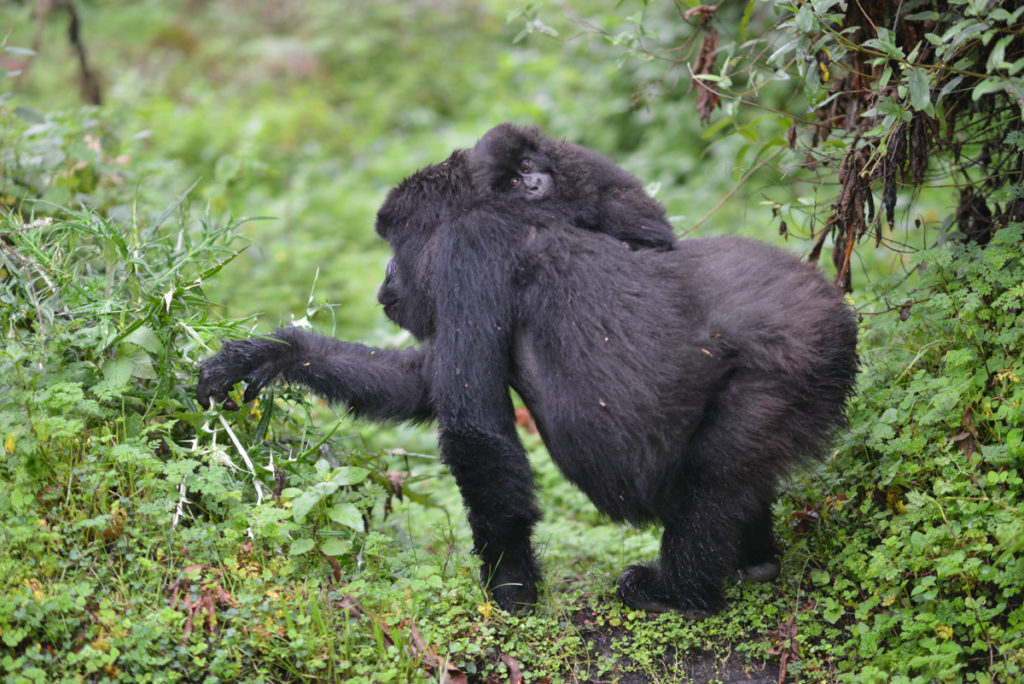