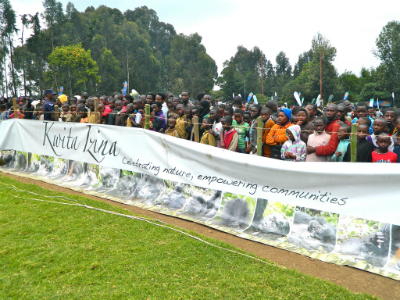 The greatly anticipated ninth annual Kwita Izina Ceremony took place in the foothills of the Virunga Mountains in Kinigi, Rwanda on June 22. Kwita Izina, a ceremony and celebration hosted by the Rwandan Development Board (RDB), in which infant gorillas born during the previous 12 months receive their Kinyarwandan names, has become one of the biggest, most celebrated events held in Rwanda since it began in 2004. Gorilla naming was practiced well before 2004, but only trackers and researchers, who knew the gorillas well, participated. Then in 2004, the ceremony was formalized and the event was expanded to include those who play a role in conservation of gorillas, such as government officials, local communities and international participants. This year more than 6,000 people were in attendance.

Over the years the celebration has expanded to include a week of community activities and events to generate enthusiasm for the ceremony. One of the most exciting events that took place this year was a Kwita Izina caravan tour. The tour, which started in Kigali and arrived in Kinigi on June 22 for the ceremony, included more than 50 participants on two large buses. They stopped at many local farms and tourist sites along the way, including a visit to the Fossey Fund’s Karisoke Research Center for a presentation about the organization by Karisoke Director Felix Ndagijimana and Veronica Vecellio, gorilla program manager, and a guided tour of the facilities.

In the days preceding the event, the Fossey Fund, with the support of RDB, also hosted several film screenings of “Gorillas in the Mist,” the 1988 film adaptation of the book of the same name written by Dian Fossey and published in 1983. The film was shown to local communities in three different locations around Volcanoes National Park to increase awareness of the event and the Fossey Fund’s history of gorilla conservation.

In the nine years the ceremony has taken place, 161 gorillas have received names. This past year 12 infant gorillas were ready for naming, five of whom were born into groups monitored by the Fossey Fund. Every year the infants’ names are selected by all of the trackers working with gorillas in Volcanoes National Park. Several weeks before the ceremony, trackers from both RDB and the Fossey Fund submit several possible names for each infant gorilla based on family profiles and photos of each infant. From the name submissions, the special guest announcers then pick each individual infant’s name.

Among the many events and entertainments that are a part of the weeklong celebration, the most exciting part of Kwita Izina for Fossey Fund staff is undoubtedly learning the names of the infant gorillas in the groups we monitor and protect. Thirteen esteemed guests announced the names at the ceremony, including American actor Isaiah Washington; American economist and director of the Earth Institute at Columbia University, Jeffrey David Sachs; Dutch model and actress, Lieke van Lexmond; and secretary general of the U.N. World Tourism Organization, Taleb Rifai, Ph.D. 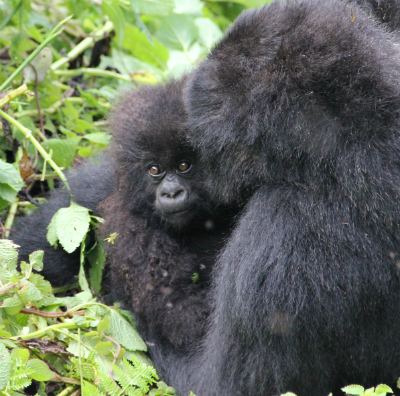 Three of the five infants born into groups monitored by the Fossey Fund were born in Isabukuru’s group to adult females Isaro, Bukima and Muganga. Isaro gave birth on July 3, 2012. Her infant was named Icyororo, which means “increased offspring” in Kinyarwanda. The name was chosen because Isaro has shown good signs of fertility, as she gave birth to Icyororo immediately after weaning her first infant. Bukima gave birth on April 1, 2013. Her new infant was named Imigano, which means "bamboo," as the infant was born in the bamboo zone in the park. Muganga gave birth on May 21 to an infant now named Fasha, which means “to help” because Muganga helps protect the group, often supporting dominant silverback Isabukuru during interactions.

Teregeza in Ntambara’s group gave birth on Oct. 14, 2012 to the newly named Ingamiya, which means "camel." The name was chosen because camels are resilient animals that can survive under very difficult conditions, like the mountain gorillas that are surviving despite all of the threats.

In Pablo’s group, Mudakama gave birth on June 18, 2013. This infant, born just two days before the event, almost had to wait a whole year before receiving his name, but it was voted on just in time for him to be included. The youngest infant named this year, he will now be known as Abasore, which means “strong person,” as the trackers in Pablo’s group need to be very strong to face the challenges of the rough terrain where the group ranges.

Though this year’s Kwita Izina ceremony is over, the event brought international attention to the critically endangered mountain gorilla by honoring the growth of the population that so many organizations, like the Fossey Fund, work hard to conserve. The Fossey Fund was honored to contribute and participate in the event, and we are looking forward to calling the infants by the their new names.