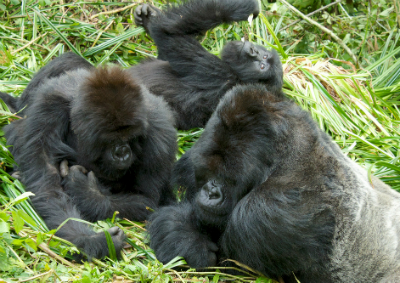 Toward the end of November, bamboo in the lower areas of Volcanoes National Park began to diminish, indicating the end of the current bamboo season, so the gorilla groups monitored by the Fossey Fund made fewer treks out of the park to get this favored food. However, there was still a lot of activity among the groups, including a major interaction between two groups and a medical intervention to help an ailing female gorilla, in cooperation with veterinarians from the Gorilla Doctors and the Rwanda Development Board (RDB), which oversees park management.

In early December, our trackers found evidence of a major interaction between Isabukuru’s group and Gushimira’s group, and witnessed many of the resulting events. The initial interaction was judged to have been very intense, taking place overnight and leaving two of the silverbacks, Gushimira and Kubaha (who is in Isabukuru’s group), with injuries. The next morning when our trackers arrived, they could see that two females had transferred to Isabukuru’s group. Displays continued for many hours, with Gushimira clearly avoiding Isabukuru, and the two females trying to follow Gushimira's trail but being stopped by Isabukuru and Kubaha standing in front.

With this latest transfer, there are now four females who have recently transferred to Isabukuru’s group, confirming it as the most successful group among those we currently monitor. Its male-female ratio is impressive, with nine females and only one other silverback, Kubaha. We have since observed frequent physical fights between Isabukuru and Kubaha and are very curious to see how the group will adjust with the two new females. We suspect that silverback Kubaha, who has been peripheral and subordinate since the group was formed in 2007, is gaining confidence and challenging Isabukuru for access to the females. 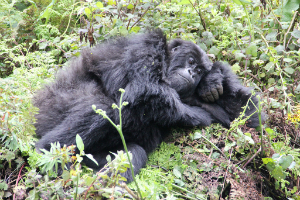 On Nov. 20, our trackers reported that 8-year-old female gorilla Izihirwa (from Musilikale’s group) was very weak, not feeding and staying on her night nest. A medical intervention was organized, with veterinarians from Gorilla Doctors and RDB, along with a select group of experienced Fossey Fund trackers and researchers and scientists.

When the team arrived, Izihirwa hid in a dense bamboo patch and stayed there for several hours. The team then decided to intervene, even though visibility was poor in all respects as it was also rainy and dark. The anesthetization and exam process went well, and Izihirwa was given antibiotics and fluids. Blood and other routine samples were obtained for later analysis.

Silverback Musilikale acted tough during the intervention. He charged and screamed at our trackers the whole time, but they did a great job chasing him away. When Izihirwa woke up from the anesthesia, staff moved away to avoid stressing her further. Her group was nearby.

The next morning she was still weak, but clearly improved. She ate a bit and her stomach seemed to be half full. In subsequent days she still seemed weak but trackers and medical staff agreed that no further intervention was warranted. The Gorilla Doctors’ analysis concluded that Izihirwa probably had a bacterial infection, of unknown origin.