It has been a difficult few weeks for the young Ndjingala, a young eastern Congo gorilla confiscated from poachers on Feb. 26 and now in the care of the Fossey Fund, in conjunction with medical assistance from the Mountain Gorilla Veterinary Project. 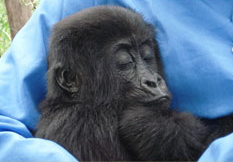 Ndjingala initially suffered from a cold and reluctance to eat or drink, but by March 13 was beginning to improve. Her psychological condition was also delicate, but she showed some signs of relaxing with her caregiver (the Fossey Fund's Gorilla Rehabilitation Program Director Sandy Jones) around the same time, exhibiting some playful interest in colorful plastic objects that were purchased for her. On March 15, she also showed interest in a small climbing structure, though she would not move more than a meter away from her caregiver.

On March 17, Ndjingala suffered from a digestive upset, but now that has improved as well and she has started drinking milk formula, which should be very helpful for her physical development. She had a complete, formal health examination on the 18th, performed by the Mountain Gorilla Veterinary Project, as did the three other orphaned gorillas we are caring for in Goma at this time. If all goes well, Ndjingala will join one of these young orphans at the end of March, and have visual access to the more boisterous larger orphans, as they all prepare for moves this spring to the Fossey Fund's new gorilla rescue and rehabilitations center (GRACE) in Congo. 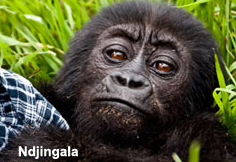 On Feb. 26, an orphaned Grauer’s gorilla infant arrived in Goma, to receive specialized care from the Dian Fossey Gorilla Fund International and the Mountain Gorilla Veterinary Project (MGVP). Approximately 1 year old and weighing 8kg, the little female was named “Ndjingala,” after the village where she was confiscated from poachers, in the Walikale area of the Democratic Republic of Congo (DRC). For the moment, she is in a quarantine section of the facility in Goma, to protect the other three Grauer’s gorillas already in residence there.

“It has been a very tense five days as together we face the many difficult challenges that lie ahead during the transition of this newly confiscated gorilla,” says Sandy Jones, the Fossey Fund’s Gorilla Rehabilitation Program director. The new arrival was dehydrated and suffering from open wounds on each hip caused by a tight rope or wire which many poachers use to control their captives, according to Jones. But the frightened infant’s psychological wounds are apparent as well, due to her abrupt journey “from a peaceful life in the green forest, to witnessing the murder of her mother, then being thrust into the busy, noisy, alien world of a human environment.”

“It is unclear just how long she has been held captive,” says Jones, “but because of her size and the delicate nature of gorilla physiology, I believe she would not have survived too many more days without receiving the correct care.” For two days Ndjingala tried to stay awake despite her exhaustion, scared of any noise or movement, but finally fell asleep. “It will take many more days before she will learn to relax and accept her safe new environment,” Jones predicts.

Staff are currently treating the infant for conjunctivitis, wiping away sticky mucus from her eyes with soft cotton wool soaked in clean warm water and applying eye ointment prescribed by MGVP. They are also urging her to drink fluids, which Jones says has been a very difficult task. They tried water, juice and baby milk formula, using a baby bottle, a cup, a plate and a spoon, but each time she would turn her head away and sometimes cough in annoyance (the way gorillas say “No” or “Stop!”).

Jones describes the painstaking efforts to hydrate the infant: “Finally, after a lot of imagination and patience, we succeeded with a leaf. We roll the leaf into a funnel, and fill it with warm baby milk formula. Slowly she opens her mouth and drinks a few drops. We repeat this over and over until she is full. As a trick, we wrapped the nipple of the bottle in a leaf, but after a few short suckles, she again turned her head and refused.

Unfortunately, on Sunday afternoon (Feb. 28) she also refused to drink from the leaf. “After several hours we hesitantly went to bed,” says Jones. “In the early hours of Monday morning I was woken to find her vomiting. This persisted for some hours, and at 2 a.m. I called Dr. Jan Ramer, veterinarian with MGVP. She quickly arranged to travel through the night from Rwanda and enter the DRC as soon as the border opened at 6 a.m.” By 7 a.m. a full MGVP team was on hand. After sedating the orphan they worked on her tiny body for over one hour, successfully giving intravenous fluids and an antibiotic injection, fully cleaning the wounds, and conducting an extensive health check of her heart, lungs, skin, hair, ear, nose and throat. “After the exam she slowly began to wake up, and once she was fully alert we offered her the stem of a banana tree, a gorilla favorite, and happily for us she accepted,” Jones says.

Right now Fossey Fund caregivers are working to gain Ndjingala’s trust, by providing her with 24-hour care and constant physical contact, just as she would receive from her gorilla mother in the wild. On March 5 she finally accepted strawberry and banana juice and ate a banana stem and pears. “She is also beginning to respond to our care, and freely approaches me for much needed physical contact. Then she truly relaxes, feeling secure in the comfort of my arms,” says Jones.

In addition to providing medical care, MGVP is working on confirming the infant’s approximate age by comparing her teeth with a chart of gorilla teeth eruption based on data collected in the field. Ndjingala has several new teeth: two upper lateral incisors and three of her four canines.

Ndjingala will move next from quarantine to the regular housing in Goma, which is itself temporary. All the Grauer’s gorillas now cared for by the Fossey Fund and MGVP, including six others in a temporary facility in Kinigi, Rwanda, will move later this spring to the new Gorilla Rehabilitation and Conservation Education (GRACE) center under construction next to a community-based nature reserve in the DRC, on land donated by the Tayna Center for Conservation Biology. There, they will be in a more natural environment and can learn to live in the kind of group that allows wild gorillas to survive and reproduce in the forest, their ultimate destination.