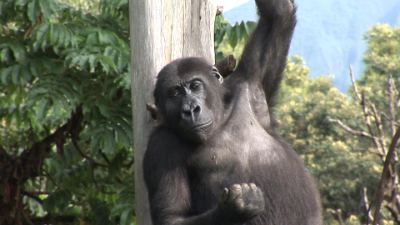 Six orphan Grauer’s gorillas are being prepared to move to the GRACE rescue center in February from their temporary quarters in Kinigi, Rwanda. Ranging in age from under 5 years to about 9-1/2 years old, they have been cared for by the Fossey Fund and the Mountain Gorilla Veterinary Project since they were confiscated from poachers during the past decade.

The Gorilla Rehabilitation and Conservation Education (GRACE) center is a new state-of-the-art facility in the Democratic Republic of Congo, next to a vast forest that is the natural habitat of Grauer’s gorillas. Operated by a small consortium, including the Fossey Fund, The Disney Company, the Congolese national park service (ICCN) and the Tayna Center for Conservation Biology (TCCB), GRACE can provide specialized care for up to 30 gorillas in preparation for their eventual release to the wild. While the facility already houses four younger Grauer’s infants, a vital stage in its construction is now underway, to provide the somewhat older gorillas with the wilderness experiences they need.

At GRACE, these six gorillas will initially have a small outdoor enclosure to enjoy when they leave the night house each morning to play, interact with the younger gorillas and engage in a limited amount of climbing and roaming around, as they did in Kinigi. But they are no longer fragile infants and need to begin exploring the forest, where they can practice being gorillas, independent of human caregivers. With safe access to the adjacent forest they will be able to climb trees, forage for food, and explore the outdoors like any other wild gorillas. This requires the construction of a special, expensive fencing system within the forest, for which the Fossey Fund and its partners are now raising funds.

The four very young gorillas who moved to GRACE from Goma in April are able to roam the forest each day with their caregivers without needing a fence, because gorillas that young are still dependent on caregivers and will not leave their side for long. However, the older gorillas will naturally want to roam for longer distances on their own and could encounter poachers or stray into village territory without some barrier. For this purpose, a special fence must be built in the forest to keep them safe during their learning period.

The six gorillas coming from Rwanda do not yet enjoy the leadership and protection of an experienced silverback, and they have yet to form the bonds and the hierarchy that would organize group life. The oldest male, Ntabwoba, at about 9 years old, has not yet entered the silverback -– or leadership — stage. Their experience of group living up to this point, though important, has taken place in a limited space with the constant supervision of their caregivers. They now need an adolescence free from external threats, so their development can catch up with that of gorillas who have roamed in the forest all their lives.

“It is vital that they begin to learn forest skills as soon as possible, so they do not lose precious time toward being able to return one day to their natural habitat,” says Sandy Jones, GRACE’s confiscated gorilla manager.

Meanwhile, back in Kinigi, they have become accustomed to entering and playing around the crates that will be used to carry them on their airlift from Rwanda, which is being planned to take place in helicopters provided by the U.N.’s Congo peacekeeping unit (MONUC).

“We are very excited about this second transfer, despite its challenges,” says Juan Carlos Bonilla, Fossey Fund vice president for Africa programs. “The forest fence will be key to ensuring that all the gorillas have room to learn social and survival skills together and form the kind of group gorillas need to live freely and reproduce.”

GRACE was initiated by the Fossey Fund, at the urging of the Congolese national park service (ICCN) with funding from the U.S. Fish and Wildlife Service, and design and construction assistance from Disney's Animal Programs. The Fossey Fund and The Walt Disney Company are the first of several partners that will continue long-term funding and operation of the center.