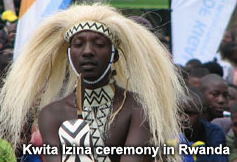 On June 5, Rwanda celebrated the sixth annual "Kwita Izina" gorilla-naming ceremony, which celebrates and promotes mountain gorilla conservation. The main event of this celebration is the naming of newborn gorillas born in the Volcanoes National Park during the past year. This includes those born within the gorilla groups monitored daily by our Karisoke™ Research Center, as well as in gorilla groups that are habituated for visitation by tourists.

Each year, Karisoke trackers and team members come up with three potential names — in the Kinyarwanda language — for each gorilla infant born. During the official ceremony, special guests are then given the honor of selecting one of these names for each infant. The guests include international celebrities, ambassadors, political leaders and conservation-based officials. People from many different countries and backgrounds attend, in addition to a large audience of Rwandans. This year's event was even more special as it fell on World Environment Day. The theme of this year's celebration was highlighted in a speech by Rwandan President Paul Kagame: "Many species, one planet, one future…" 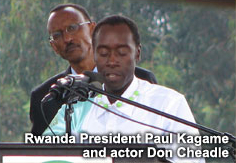 Among the special guests this year were the executive director of UNEP, the director of the Conservation ARCUS Foundation, representatives from the U.S. Embassy, and the president of the Rwandan Tour and Travel Association. Actor and conservation advocate Don Cheadle also participated and gave a speech focusing on the importance of facing environmental issues and dwindling resources. Fossey Fund CEO and President Clare Richardson was also invited, and received the honor of officially naming an entire gorilla group. Traditional drums and dancers in bright-colored costumes helped entertain the thousands of spectators. 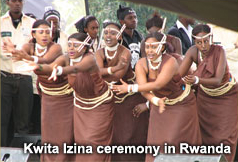 The Karisoke gorilla groups were also officially named during the ceremony. Fossey Fund President Clare Richardson gave the name "Inshuti" to the group in which Inshuti is the silverback. "Inshuti," she said, "grew from a bachelor to a gorilla leader with a group of females and infants, which is a success story for gorillas and Rwanda." Ntambara's group, Isabukuru's group, and Ugenda's group were also among the Karisoke research groups that were officially named.

In order to allow the mountain gorilla population to thrive, it takes the devotion, sacrifice and hard work of many number field staff. Karisoke and national park trackers and field team members are among the first to set eyes upon newborn infants, report and monitor their health, and protect them from illegal activities. They are the ones who dedicate their lives to the well being of this endangered species. Within the crowds of spectators, almost out of view, Karisoke field staff stood proudly in their uniforms. Their dedicated eyes gleamed with pride as they heard the echoes of the new gorilla infant names called out. 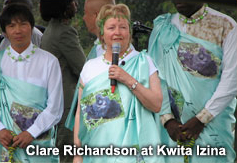 "Kwita Izina is good," says John Ndayambage, Karisoke field data coordinator, "because it reminds the people that it is necessary to protect gorillas and to allow people from other countries to learn about them."

Indeed, it was the names themselves that were the highlight of the day, as they are symbols of the mountain gorilla's survival and conservation as a whole. "We must thank all of the trackers and field staff for their hard work in the field," said Richardson in her speech. For without them, there would be no newborn mountain gorillas to name.