As we prepare to move six rescued orphan gorillas from a temporary facility in Kinigi, Rwanda (operated in conjunction with the Mountain Gorilla Veterinary Project) to the state-of-the-art Gorilla Rehabilitation and Conservation Education (GRACE) center in the Democratic Republic of Congo, preparations on both sides are in full swing.

At Kinigi, crate-training for the young Grauer’s gorillas has been center-stage for a couple of weeks now, since they will need to travel in special crates on the helicopter flight taking them to Congo. 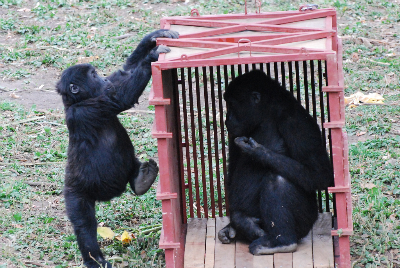 At the crack of dawn one recent morning, the young gorillas walked out of their night-house to find in their outdoor enclosure several big crates, which will host them during the helicopter transfer. Cautious but curious, they rapidly spread out and examined these “intruders,” which had been diligently prepared by the caregivers, who had scattered peanuts and forest foods all around, to the gorillas’ great delight.

As the hours went by, the gorillas gained confidence. From barely touching the bars to climbing the crates, displaying on top of them and even squatting inside, the transition was very smooth. For the more reluctant gorillas, the caregivers had prepared yet another treat: peanut butter smeared in the crates, which drew them to run enthusiastically inside. And while the younger gorillas Tumaini and Dunia were still seeking comfort from their caregivers, the powerful male Ntabwoba was already taking over the new territory, trying to roll over the heavy crates and testing the resistance of the barred doors, which were lying aside on the ground. 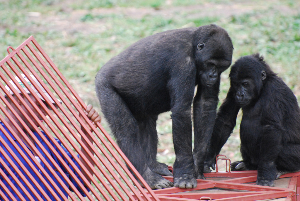 Days later, when the gorillas had become very self-assured, they also started to receive drops of juice from a syringe every morning and evening, to prepare them for the day of the transfer, when they will be given a sedative the same way. To get them used to the taste of the medication, veterinarians last week began alternating sweet juice with a bitter-tasting substance, which most of the gorillas also accepted without much fuss.

Meanwhile, across the border in Congo, Sandy Jones, our confiscated gorilla program manager, is advising on the final stages of construction and making arrangements for the new arrivals at the GRACE facilities. 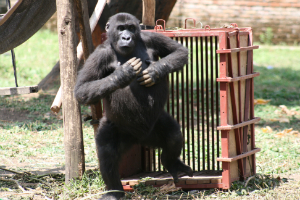 “We have to be fool-proof here, before we bring the Kinigi orphans over,” Jones said. “Most of those gorillas are far bigger than the ones we currently have in our care at GRACE, so we must avoid all potential risks, for both the animals and the caregivers who will tend to them. In addition, we must think about this scenario: that we could have the gorillas at GRACE for some years, which means that our facility must be adequate for eventually hosting a 200-kg silverback, with the strength of seven men.”

Apart from the GRACE gorilla holding facility, which is receiving its final touches, an electric fence was recently installed around the mixing yard, where the Kinigi gorillas will first go out from the night-house. Eventually, a much longer electric fence will be needed, in order to allow the GRACE residents to move freely in the forest and not come into contact with the human population from the neighboring villages.

Following the transfer of the Kinigi gorillas, the smaller gorillas already at GRACE and the Kinigi newcomers will be housed separately for a significant period of time. While the younger Kighoma, Mapendo, Amani and Ndjingala will continue their daily routine in the forest, which they are tremendously enjoying, the six new gorillas, who will initially benefit from the presence of their beloved Rwandan caregivers, will undergo a one-month quarantine period. Only afterwards will small steps be taken to introduce the two groups. At first there will be several weeks where they will just be able to hear and smell each other, and after that they will have visual contact, but not physical contact. Ideally, soon thereafter, they will be ready to have physical contact as well, but Jones cautions about high expectations.

“Gorillas will dictate the pace here,” she says. “We are hopeful that eventually we will have one big, happy group, but the reality is that we will just have to wait and see.”