Over the past few months, the Congolese wildlife authority (ICCN) has been facing increased illegal trafficking of infant Grauer's gorillas. When authorities rescue these young gorillas, they cannot be returned to their natal groups and are now both orphaned and separated from their natural habitat. 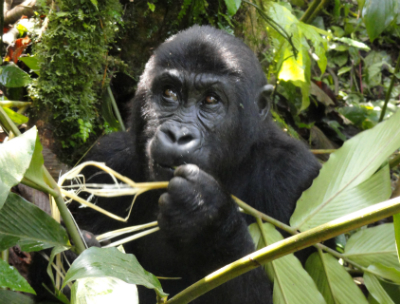 Urged by ICCN to find solutions for the orphaned gorillas, the Dian Fossey Gorilla Fund and partners established the Gorilla Rehabilitation and Conservation Education (GRACE) center several years ago, to rehabilitate these young gorillas and one day hopefully return them to the wild in new groups.

GRACE faces many challenges to carry out its mission in 2013 and beyond. This fall, two more Grauer's gorillas were rescued from poachers. These two and one more young gorilla are in a temporary location and will be transferred as soon as security conditions allow. When they arrive, they will require special attention until they can be integrated into the existing gorilla group, and the youngest orphan already there will join them too. Four new individuals meeting such a large group could be complicated, but so far all 11 gorillas now living together have accepted each other as housemates and playmates. After that, GRACE will be just about at its current capacity, until funds can be raised to build more housing and hire more staff.

GRACE is dedicated to the care, rehabilitation and reintroduction of rescued Grauer's gorillas that are confiscated by authorities due to illegal animal trafficking. Through conservation education and community outreach, GRACE works with local communities to build a sustainable future for wildlife, forests and communities neighboring gorilla habitat.

For more on GRACE, click to news story: GRACE: A Second Chance for Rescued Gorillas