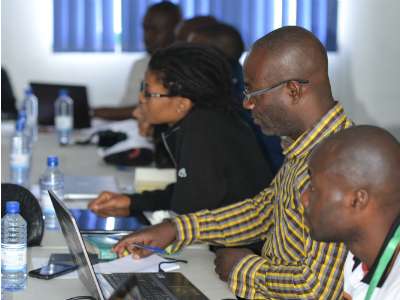 In March, the Fossey Fund launched a new project to increase scientific interactions and collaborations among Congolese and Rwandan scientists. The project, funded by a grant from the Richard Lounsbery Foundation, is called “Science without Borders” and will help conservationists in Rwanda and the Democratic Republic of Congo (DRC) develop autonomous research and collaboration skills.

The political diplomatic relationships between Rwanda and DRC have been particularly tense during the past two decades, but this project presents the opportunity to create and re-create scientific partnerships with the underlying belief that science transcends politics. The goal of the project is to not only initiate a long-term transboundary collaboration but also to share and analyze data that might help shed new light on some of the factors that are responsible for the differences we see between mountain and Grauer’s gorillas. Almost everything known about eastern gorillas comes from one field site—the Fossey Fund’s Karisoke Research Center—but there is a lot to be learned about Grauer’s gorillas.

Seven Congolese scientists from Kahuzi-Biega National Park and from our Nkuba-Biruwe field site came to Karisoke in March for a workshop to kick off the project. In addition, representatives from Gorilla Doctors, the Rwanda park authorities (RDB) and the International Gorilla Conservation Program (IGCP) were also present. During the workshop, participants designed five collaborative projects about gorillas and their habitats. RDB also invited the participants to visit Volcanoes National Park and climb the Bisoke volcano. Each project team will be responsible for implementation and budgeting, but Fossey Fund staff, including Dr. Damien Caillaud, Dr. Winnie Eckardt, Felix Ndagijimana, Urbain Ngobobo, and Dr. Tara Stoinski, will be available for guidance and logistical support.

During the first year, the goal of the project will be to establish long-term research protocols on Grauer’s gorillas and their habitat, similar to those already established at the Karisoke Research Center; collect social and behavioral data at two field sites (Kahuzi-Biega National Park and Karisoke); establish exchanges between the three field sites every three months; and conduct a synthesis workshop at Kahuzi-Biega in 2016. However, the overall goal of the project is to continue collaboration beyond the scope of one year and foster an ongoing climate of scientific “diplomacy.”