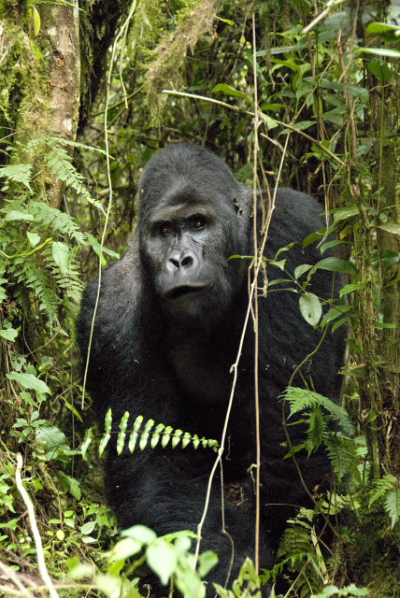 The Grauer's gorilla is again included on a list of the world's 25 most-endangered primates, released for the period 2012-2014 by the International Union for Conservation of Nature (IUCN) earlier this month. The Grauer's gorilla was included on the previous list as well. The "Red List of Troubled Species" takes into account various threats to species, such as destruction of their forest habitats, illegal wildlife trade, and commercial bush meat hunting.

"The inclusion of the Grauer's gorilla on the IUCN's list is a sobering reminder of the challenges to protecting this endangered ape," says Tara Stoinski, Ph.D, vice president and chief scientist for the Dian Fossey Gorilla Fund International. "Our organization has been working on various ways to address these threats to Grauer's gorillas, including working with community-based reserves and national parks, establishing a rehabilitation center for young gorillas rescued from poachers, and setting up a Grauer's Gorilla Conservation and Research Program to begin direct monitoring and protection."

According to the Grauer's gorilla entry on the IUCN's Red List website, "Due to high levels of exploitation, and loss of habitat and habitat quality as a result of political unrest and expanding human activities, this subspecies is estimated to have experienced a significant population reduction in the past 20-30 years (one generation is estimated to be 20 years), and it is suspected that this reduction will continue for the next 30-40 years." There is no current census of their population numbers, but by some estimates there may be as few as 4,000 Grauer's gorillas left in the wild. They are found only in a vast forest in the Democratic Republic of Congo (DRC).

Although it highlights the imperiled status of the Grauer's gorilla, the subspecies' continued inclusion on IUCN's 25 most-endangered primates list is also a call to action, which the Fossey Fund hopes will garner further support for conservation activities in DRC.

"What does the inclusion of the Grauer's gorilla on the list mean for our program?" asks Stoinski. "It underscores the importance of our work in this region. We hope to be able to stop the trend of decline as we have done with mountain gorillas in the Virungas, the only great ape population to have increased in recent decades. We hope that the continued focus on Grauer's will help secure the resources needed to do this. Significant resources are needed each year to protect the mountain gorillas, and the Grauer's habitat presents an even greater challenge due to its size and remoteness."

Despite the ongoing crisis in the Congo, which flared up again this past May, the Fossey Fund has developed its infrastructure and on-the-ground presence in Grauer's gorilla habitat, focusing on community-based nature reserves, which are not under the protection of the Congolese wildlife authority (ICCN) but form an important ecological corridor between Maiko and Kahuzi-Biega National Parks. This year, the Fossey Fund established the Biruwe Research Base, a central operating facility for the Grauer's Gorilla Conservation and Research Program, and three mobile bio-monitoring posts. The program has also completed 30 explorations to identify gorilla groups suitable for long-term monitoring.

"Our first-hand experience working in Grauer's gorilla habitat is consistent with the IUCN's assessment of the threats to the species. We hope that through the efforts of our Grauer's Gorilla Conservation and Research Program and our partner organizations in the DRC we will make strides toward protecting this important subspecies," says Stoinski.