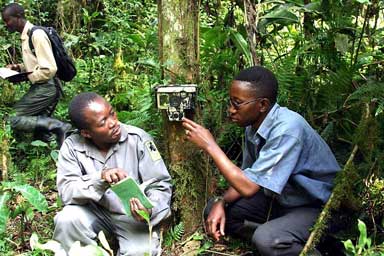 New scientific surveys by the Dian Fossey Gorilla Fund International in the Democratic Republic of Congo (DRC) have revealed some encouraging news about the status of the “eastern lowland” gorilla, known more properly as Grauer's gorilla (Gorilla beringei graueri).
Based on the latest research with our Congolese partners — the DRC wildlife authority (ICCN, Congolese Institute for the Conservation of Nature) and a federation of community-based reserves (UGADEC, Union for the Conservation of Gorillas and Development in Eastern DRC) — we now estimate that Grauer's gorilla, which exists only in eastern DRC, ranges from a population of 5,500 to some 28,000 individuals, occupying an area of about 21,000 square kilometers.
While the Fund's recent analyses indicate that at least 24 percent of this gorilla's range was lost between 1959 and 2005, Grauer's gorilla has continued to survive throughout long periods of civil war. This recent research also indicates that earlier surveys appear to have missed or underestimated important priority areas for this gorilla's overall distribution. This demonstrates clear and present opportunities for protecting Grauer's gorilla, through the Fossey Fund's continued support for national parks and community-managed nature reserves in this region.
The Fossey Fund has played a primary role in this regard, beginning its conservation program in the area in 2001. The Fund's first major project in the region was the Tayna Gorilla Reserve, a community-based reserve of 900 km2 initiated by local residents and now recognized as an official protected area by the DRC national government. By 2002, another seven communities, modeling their efforts after Tayna, joined together to form UGADEC.
In 2003, the Fossey Fund took on a lead role in a program to rehabilitate Maiko National Park, an important protected area in this region, in partnership with Conservation International, which provides funding from the USAID CARPE program and from its own funding agency, the Global Conservation Fund.