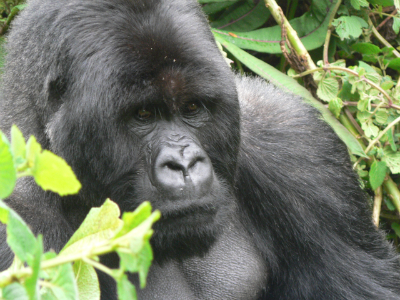 Dominant silverback Isabukuru fought Kubaha Monday, reported Karisoke Research Assistant Jean Paul Hirwa. The researcher noticed that Isabukuru was clearly uncomfortable with Kubaha’s presence yesterday morning when the field staff arrived at the group, and the dominant male was keeping a close eye on the beta male. Kubaha lingered about 10 meters from the group for a short while before Isabukuru confronted him.

When Isabukuru approached Kubaha, the beta male “pig grunted” towards him in warning, but Isabukuru advanced on him, initiating a short bout of “kick-hits." It was clear that Isabukuru had “defeated” Kubaha when the dominant silverback had him pinned to the ground screaming, with Kubaha assuming a cowering posture. Kubaha attempted to make his escape, but Isabukuru held him down, mouth open wide and teeth poised above his opponent. The females of the group were equally aroused and Ikaze bit Kubaha in a moment of excitement.

Isabukuru rounded out the incident with a vigorous display towards Kubaha, then “kick-hit” him before allowing him to go. Kubaha immediately started moving away from the group and was feeding very far from Isabukuru’s group when the observation and data collection period came to a close. The Fossey Fund field staff was unable to detect any serious injuries on Kubaha, however a wound was seen on his right arm from Ikaze’s bite. Karisoke researcher Stacy Rosenbaum made plans to trek to the group the next day to collect data and report on the group dynamic. More to come.