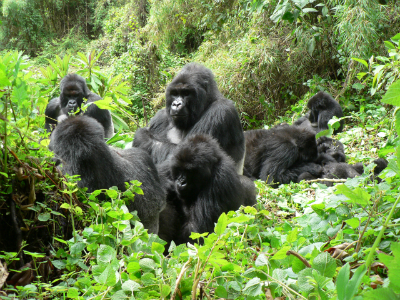 After months of physical fights among the three silverbacks of Kuryama’s group, one of the newer mountain gorilla groups we monitor and protect from the Karisoke™ Research Center in Rwanda, a peaceful equilibrium was finally achieved as the result of a convenient “agreement” between the top-ranking and second-ranking males: silverbacks Kuryama and Kirahure.

The conflicts were motivated by issues related to access to females. Three of the adult females have only recently resumed their estrous cycles, after three years of caring for their infants. Gorilla mothers are infertile during the early infant-rearing process, thus giving the three males of the group little reason to compete during that time. But now things have changed!

In February and March, second-ranking male Kirahure was able to mate with favorite females Mahirwe and Muganga, while Kuryama limited his mating encounters to a few occasions with female Umusatsi. Vuba, the third male, also succeeded in a few encounters with females, which he carefully hid from the other males. 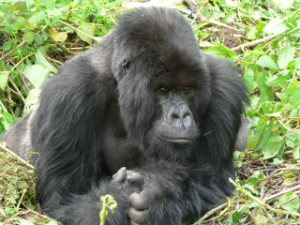 Despite Kirahure’s success in doing most of the mating, Kuryama seems to remain in power as group leader, always first during group travel (group members follow him in single file). However, it is exactly during these travels that Kirahure tested his social escalation, by attempting to pass in front of Kuryama. For several meters the two silverbacks would quickly move in parallel, accompanied by loud vocalizations from the females, responding from behind to the bizarre competition.

In March, for the first time, we observed Kirahure winning and displacing Kuryama from his head position. A single event is not enough of a basis for speculating on dominance change but it is certainly a red flag, signaling an unstable male-male relationship.

In the other hand, it is convenient for the males to keep their alliance stable, in order to ensure group protection during the frequent encounters with outsider gorillas. This last happened on March 21, when solitary male Giraneza appeared and insistently tried to enter the group, thereby forcing it to engage in strenuous travel covering four kilometers. The interaction wasn’t physical, as Giraneza avoided a close approach to the three Kuryama males. Perhaps because there are five infants in the group, the three silverbacks decided to move away without aggression toward Giraneza. 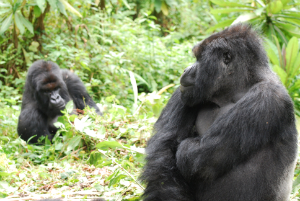 On that day, Kuryama, Vuba and Kirahure were close to each other, forming a protective barrier for the females and their infants. A strong cold rain started to fall, making the interaction especially unpleasant, and all the gorillas gathered together around the three silverbacks in a typical squatting posture to minimize the body heat loss. This was a moment of great group cohesiveness, which showed how male alliance is a winning strategy versus internal competition over females.