The Fossey Fund is saddened to report the death of dominant silverback Gushimira. When our trackers arrived at his group this morning, three of his group’s females were found with well-known lone silverback Giraneza, but Gushimira – along with five other group members – was not seen. In the afternoon, our trackers found Gushimira’s body. There were open wounds on his back, a sign that he had been killed by another silverback.

Our trackers also located an interaction site, and its trail led to Giraneza. By reconstructing the evidence, it seems clear that Giraneza was responsible for killing Gushimira, and that the incident occurred last night.

Last week Gushimira had some health issues, which made him weak for several days (see previous blogs below). Karisoke staff were monitoring him closely, and although he had been recovering, it is likely he was still not in full health. 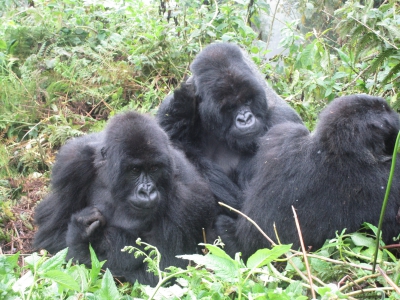 Born in Pablo’s group, Gushimira was 19 years old and had formed his group in February 2013, when he gained some females from Ugenda’s group. The new group then spent two years trying to establish its home range, before finally settling in the area previously used by Ugenda’s group (which had dispersed into various groups this year after the death of its dominant silverback). Due to its location and the calm nature of Gushimira, the group then became one of those also visited by tourists, who are led by park authorities.

Right now we are most concerned about the missing group members, including an infant, a juvenile male, and three females, some of whom may be pregnant. We hope to be able to recover Gushimira’s body today, so that a necropsy can be performed.

Our field staff will be monitoring this situation closely. We will post any additional information here as soon as it becomes available.

To read more about about lone silverback Giraneza, click here.