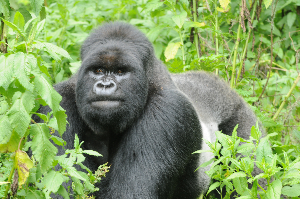 Gwiza is a 22-year-old silverback, who broke away from Shinda’s group in April 2004. At that time Gwiza was 16, and he attempted to form his own group by persuading two recently transferred females to move away with him. The three gorillas stayed together for two months only, as the two females eventually rejoined their original group.

Gwiza’s solitary life began on June 5, 2004. Since then, he has traveled around the Visoke volcanoes in the same area used by his original group, Shinda’s, but has kept his distance and avoided any interaction with the other gorillas. The presence of six silverbacks including the powerful leader Shinda was intimidating enough to discourage a lone silverback from trying any approach. 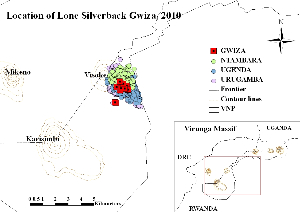 The Karisoke™ Research Center tracker field team often observes Gwiza feeding and moving around. He has always been extremely tolerant of human observers and not scared of being approached, so much so that those peaceful encounters have become routine for our field staff.

His appeasing nature changed upon the death of dominant silverback Shinda, in November 2008. Shinda’s group gradually split into three groups, led by silverbacks Ugenda, Ntambara and Urugamba. For Gwiza, Shinda’s death raised new hopes of establishing his own group, as the three smaller groups became fairer game. Over the last two years, he has approached them many times. Often, the encounters became real physical interactions. Even if he does not get face-to-face with a group, Gwiza is still following their trail, waiting for the right time to make his entrance. 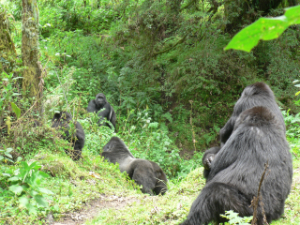 Among the three groups, Ntambara’s became a specific target, probably because of the presence of three sexually mature young females without offspring. The females have observed the males fighting and exchanging powerful displays with Gwiza, but so far none of them has tried to join the lone silverback. Gwiza is a large, robust male, so it will not come as a surprise if a female attracted to his physical appeal eventually escapes the vigilance of the group’s silverbacks and joins Gwiza, establishing a new group.

It is not clear why Gwiza chose to remain in the same area and why he never tried to interact with other groups. This behavior is different from that of his companion Inshuti, who also left Shinda’s group and became a lone silverback, just three months before Gwiza. By contrast, Inshuti intensively tried to establish a group of his own by moving long distances between the Karisimbi and Visoke volcanoes and by interacting with all groups in the area, until he eventually succeeded in becoming the leader of a new group. 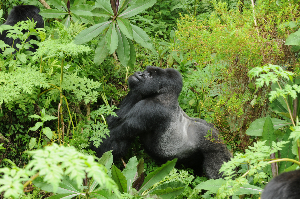 Once again, the observation of gorilla behavior shows that different individuals have different ways to deal with similar scenarios, according to personal choices.