Being a mountain gorilla tracker means being on the frontline of conservation every day, hiking long distances in harsh, high-altitude conditions, and handling all kinds of situations from dismantling snares to finding missing gorillas. The Dian Fossey Gorilla Fund is lucky to have an extremely dedicated tracker staff, some of whom have been with us for decades, despite the grueling and demanding daily work.

Our longest-serving tracker is Jonas Nubaha, who started working with the Fossey Fund in December 1979! At that time he was on an anti-poaching team, later becoming a gorilla tracker in 1994. He was not assigned to any particular gorilla group at that time, due to the instability caused by the genocide in Rwanda, and says the trackers tried their best to monitor any gorillas they could find while in the forest.

Nubaha comes from an area on the border of Volcanoes National Park, and learned about Dian Fossey’s anti-poaching team from his neighbors. He also learned about the pressure facing the forest at that time, including cattle entering the park and poachers hunting for bushmeat.

After so many years, Nubaha is still passionate about his work and says what he likes best is following the trails of gorillas and then locating them in the forest, because this requires great attention to detail and is very specialized work. Of course this can be difficult too, since sometimes the gorillas travel long distances or have trails overlapping with other groups. 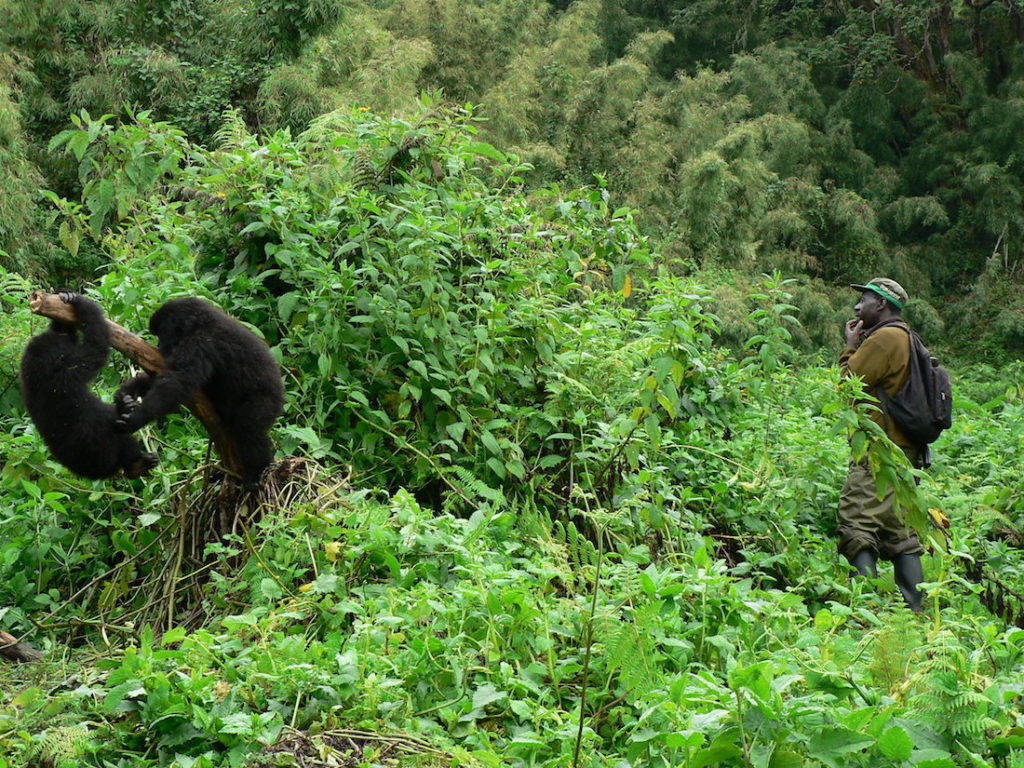 Of all the gorillas he has known, the late silverback leader Shinda was his favorite. Shinda was known for fairly aggressive behavior around most of the trackers, but to Nubaha he was surprisingly friendly and would often approach him. In fact, other trackers used to stay close to Nubaha so as to be more “accepted” by Shinda!

One of Nubaha’s favorite stories to tell involved a bit of stress with another silverback, the legendary Cantsbee who died earlier this year of old age. Years ago when Cantsbee was still a young silverback, he suddenly approached Nubaha and dragged him along the ground, then sat on him and started feeding on some plants. Cantsbee also made a few displays at Nubaha, including hooting and chest beating, still while sitting on him.

Nubaha says that “ideally all people should see gorillas themselves to realize how special they are.” He is fascinated by their behaviors, social organization, and love and support for their group members. He especially enjoys watching them feed on seasonal bamboo shoots, as they go around collecting and carrying bunches of them. “I relate that feeding behavior to people when they go to the market,” he says.

Nubaha says he is very proud and honored to have contributed to gorilla protection for all these years and is happy the gorillas are now so much better protected than when he started decades ago. The Fossey Fund has also been good for him as a career, he says, helping him to sustain his family and through paying school fees for his children (a Fossey Fund practice for local staff).

“Jonas Nubaha is an incredible asset to the Fossey Fund and to gorilla conservation,” says Felix Ndagijimana, the Fossey Fund’s director of the Karisoke Research Center and Rwanda programs. “We and the gorillas are lucky to have such dedicated staff, who continue to be passionate and never tiring of this work for so many years.”