A new report from the United Nations Environment Programme (UNEP) and partners states that organized crime and illegal trade in natural resources continue to create conflict in eastern Democratic Republic of Congo (DRC). According to the report, gold, minerals, timber, charcoal and wildlife products, with an estimated value of around $1 billion, are exploited and smuggled illegally, with some of the trade and most of the net profits going to transnational organized criminal networks based outside DRC.

The conflict in DRC has led to the loss of more than five million people over some two decades, and has also threatened the area’s important wildlife, including two types of gorillas (mountain gorillas and Grauer’s gorillas). Illegal mining and charcoal trading, and the resulting increase in deforestation, as well as bushmeat trade (which feeds both mining and charcoal camps as well as local populations and those in cities far away) are some of the issues that affect the gorillas and their habitat. 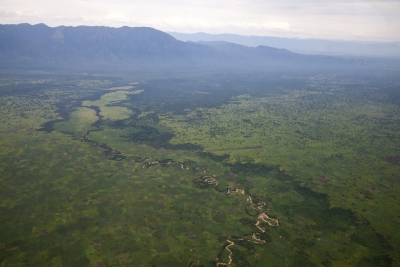 The Dian Fossey Gorilla Fund works in eastern Congo to study and monitor endangered Grauer’s gorillas, from two field sites – one in Kahuzi-Biega National Park and one in the remote Nkuba-Biruwe area. To work in Nkuba-Biruwe, our staff must deal with armed groups and continued insecurity. This is an everyday challenge but our work has continued successfully so far. However, a lack of law enforcement means there is no direct way to deal with poaching. Our focus has been to try and sensitize local communities, to show them that harming the forest is actually harmful to the whole community, and to get them to reduce hunting in areas where great apes need to be protected.

“In the past two decades, the local community living near Nkuba-Biruwe has seen wildlife disappearing from the forest. Elephants and red colobus monkeys are now locally extinct as a result of ivory and bushmeat trade, and gorillas and buffaloes are next on the list. We work closely with the community to implement solutions that benefit both humans and wildlife,” explains Dr. Damien Caillaud, the Fossey Fund’s Grauer's Gorilla Conservation and Research Program director.

In a UNEP press release, Achim Steiner, UN Under-Secretary-General and Executive Director of UNEP, said: "There is no room for doubt: wildlife and forest crime is serious and calls for an equally serious response. In addition to the breach of the international rule of law and the impact on peace and security, environmental crime robs countries of revenues that could have been spent on sustainable development and the eradication of poverty."