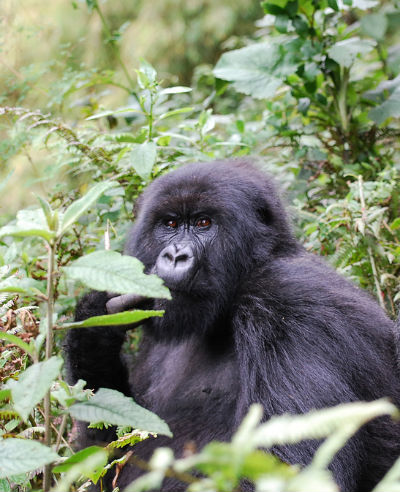 Karisoke™ field staff report that silverback Rano has achieved another success: the conquest of female Imvune, who decided to join his group after an encounter with her natal group, Ugenda’s (previously named Shinda’s group).

Imvune is the second female to join Titus’s group since Rano attained the dominant position after the death of his father, Titus. The first new female, Umwana, arrived in January from Pablo’s group. She was immediately welcomed, forming a solid couple with Rano. He became very jealous of Umwana, keeping her at a secure distance from any other group member. After the recent death of the elderly female Tuck, Umwana became the group’s only female, and was strictly protected by the dominant silverback.

On the last day of October, the group was stirred up by Imvune’s arrival, but she was soon welcomed by Rano and especially by the group’s three blackbacks. The arrival of the much younger female did not change Rano’s preference for Umwana, however. In fact, Rano allowed the three young males to interact with the group’s new member. Imvune’s playful nature was soon appreciated by her new group, as Turakora, Pato and Urwibutso as well as the juvenile Segasira are clearly enjoying their new playmate. 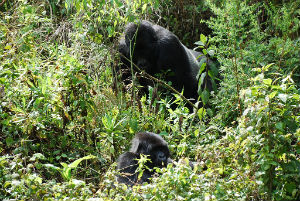 Besides playing, Imvune has also been the target of sexual attentions from the three blackbacks, a fact that made the second male of the group, Turakora, more tense, trying to keep her for himself. Blackback Pato solicited copulation with Imvune several times but was immediately interrupted by aggression from Rano and Turakora. Rano, confident of his alpha position, did not appreciate the sexual attention shown to Imvune by the young males and he displaced them from her side.

Despite many attentions from all group members, Imvune is still committed to impress the dominant Rano. She sits close to him, grooming him for hours every day.

Rano is proud of his two females. He demonstrated his commitment to them during an encounter with Isabukuru’s group that occurred on November 22nd, when he pushed away the outsider silverbacks with charges and other physical aggressions.

Isabukuru’s group has two silverbacks: The dominant Isabukuru and the young silverback Kubaha. The two males started following Rano’s group early in the morning, leaving their own females alone. The two males were clearly interested in Umwana and Imvune from Rano’s group. They started a series of displays, pulling big branches and beating their chests in order to impress the two females. 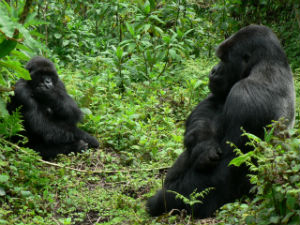 Rano and the three young males of his group reacted by facing the two outsiders with “strut stances” (a typical posture used in conflicts, with the head up and arms and legs tense) and displays. After 30 minutes of interacting, Kubaha approached female Umwana, who screamed. Immediately, Rano jumped on him, biting him furiously. All group members run after him, screaming. Kubaha was severely injured and left the interaction site, slowly rejoining the females of his group, leaving behind traces of blood.

However, Isabukuru still intended to fight for Rano’s females and insisted on following the group for the entire morning. Rano pushed the group ahead, stopping from time to time to face Isabukuru. Isabukuru ran away from all Rano’s charges, as he was clearly intimidated by him. Around 1 pm another serious fight broke out between the two silverbacks, enriched by loud screams from all the gorillas. That fight signaled the end of the interaction. Both silverbacks were badly injured. Rano finally succeeded in leading the group away to another area and Isabukuru, slowly and in pain, rejoined his females, whom he had left two kilometers behind.

The result of such intense interaction was evident on the silverbacks’ bodies, which were full of deep cuts and tooth marks. In particular, Rano lost two joints of his little finger, a sign which will remind us forever of his strong commitment to protect his group.