In honor of Maggie's 35th birthday

Elderly female Maggie is one of the few remaining mountain gorillas of the generation studied by Dian Fossey. She’s also a favorite of Fossey Fund honorary chair Sigourney Weaver, who met Maggie while filming “Gorillas in the Mist,” based on Fossey’s book. And she is loved and admired by Fossey Fund staff and many others who have had the privilege to see her or know her story. 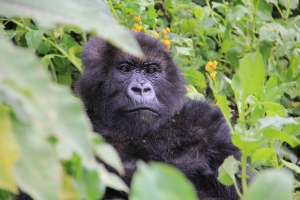 There are various reasons for Maggie’s popularity. She has demonstrated an outstanding personality in many aspects of her life, doing things rarely if ever seen among female mountain gorillas. For example, she successfully led a group of gorillas after the silverback died last year, and she has been seen destroying dangerous snares set in the forest by hunters.

But it’s another one of her unusual characteristics that has the Fossey Fund thinking about Maggie the most, as we now contemplate her 35th birthday. Since the changes in her latest groups, she has developed the tendency to travel on her own, without a group. This is extremely rare for a female mountain gorilla.

On Feb. 17, Maggie left the latest version of her group, which by then had merged with Ugenda’s group. She did this apparently due to the intrusion of lone silverback Giraneza, whose overtures she rejected. She has since traveled entirely on her own, with a special team of trackers dedicated to locating her each day. This worked for a while, but since March 28, our trackers have not been able to locate her, probably because she has traveled over the border into DR Congo, where our Rwanda-based teams cannot search.

Maggie was born on June 15, 1980, in Group 5, which was one of the gorilla groups first studied by Dian Fossey. Maggie’s mother, Effie, was the head of the largest matrilineal family known to researchers. Effie’s family was unique and included many top-ranking gorillas, males and females alike. Effie’s daughters, in particular, have all become dominant females in their respective groups, and Maggie is a prime example.

So, wherever she is now, we are proud to think about Maggie, a most unusual gorilla, on her 35th birthday.